Moon+ Reader is one of the most versatile eBook apps for Android, offering support for a wide range of formats, an option to sync your progress across multiple devices (using Dropbox), and a number of ways to customize the reading experience.

Earlier this week the app was pulled from the Google Play Store following a complaint from a Russian bookseller claiming that Moon+ facilitated piracy. But now Moon+ is back in the Play Store — and the developer is celebrating (and capitalizing on recent publicity) by offering the Pro version of the app for $2.49. It normally sells for $4.99. 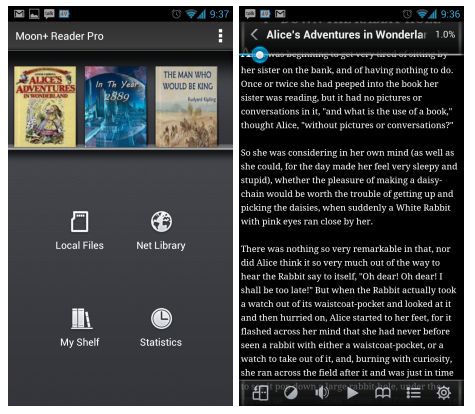 The Pro version is ad-free, supports text-to-speech, PDF files, and Bluetooth headset controls, among other things. The only thing keeping me from using it as my default reader on Android devices is that it doesn’t support Amazon WhisperSync for keeping my place synchronized between my Kindle and a mobile device (and it doesn’t automatically import .prc eBooks from my Kindle directory unless I convert the file extension to .mobi first).

If you don’t need those features, you can still grab the free version of Moon+ Reader from the Play Store.

The developer is promising refunds to folks who downloaded the app from the Moon+ website this week and paid with PayPal. The advantage to grabbing the app from the Play Store instead is that you’ll always be notified when there are new updates available.

As for the reason the app was pulled from the Play Store in the first place — Russian bookseller Lit.res suggested that there were links to eBook catalogs that allowed you to download books illegally without paying for them, but the developer of Moon+ maintains that the app simply supports OPDS catalogs (including legit eBook directories such as Project Gutenberg) and allows users to manually add links.

Anyway, the app’s back in the official Play Store now, which is a good thing both for the developer and for users.

One reply on “Moon+ Reader returns to the Play Store, celebrates by selling Pro version at half price”