While it’s possible to navigate modern PC operating systems using nothing but a keyboard, there are a lot of things that are easier to do if you have a mouse or touchpad. But those can take up valuable space and require moving your hand away from the keyboard.

Lenovo offers another approach by putting its TrackPoint nub in the center of the keyboard. But that solution has a rather steep learning curve. 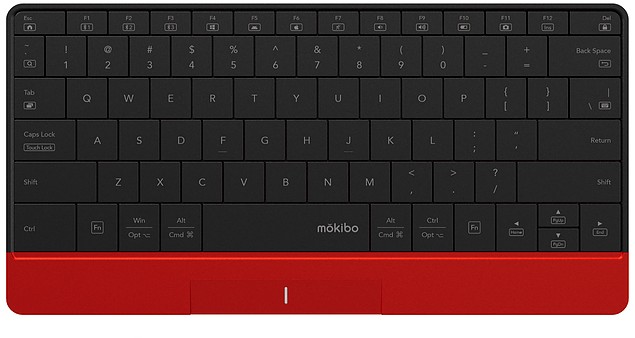 Just move your fingers across the top of the keys to scroll, click, rotate, pinch to zoom, or perform other actions. There are two small buttons below the keys which you can also use for right-click and left-click actions.

The Mokibo has 80 touch sensors integrated into the keyboard, and an island-style layout with flat key caps separated by small spaces, making it relatively easy to slide your finger from key to key. A demo video also shows that you can perform some precise actions by just moving your finger along a single key. But multi-finger actions such as two-finger scrolling or pinch-to-zoom will require touching a few keys at once.

The keyboard is said to support Windows 7 or later, MacOS 9 or later, iOS 8 or later, and Android 4.3 or later. It supports Bluetooth 4.2 and NFC, has a micro USB charger, and features a rechargeable battery.

This isn’t the first touchpad-embedded-in-a-keyboard we’ve seen. BlackBerry, for example, has been using a similar solution for smartphones including the BlackBerry Passport, Priv and Key2. But this strategy is a lot less common in laptop/desktop keyboards.

Lenovo, on the other hand, took a kind of opposite approach with its Yoga Book line of laptops. Instead of a keyboard with an integrated touchscreen, the Lenovo Yoga Book and Yoga Book C930 feature two touchscreen displays, including one which can display a virtual keyboard that you can use to type — but that solution means you don’t really feel the keys move as you press them, which can make typing difficult to get the hang of.

There’s no word on how much the Mokibo keyboard will cost or when it will be available. But you can sign up to be notified when the device becomes available.