There are a lot of “Internet of Things” products on display at CES, including smart lights, speakers, and even trash cans. But Luxrobo is showing off a system that makes it easy to build your own smart home system.

It’s called MODI, and it’s a modular system of sensors, motors, lights, buttons, and other components. You can control some individually using a smartphone app to do things like turn an LED light on or off. But things get really cool when you use a few modules together.

For example, you can use a motion sensor and a motor to open the lid on a cookie jar when you wave your hand. Or you can set up an alarm that makes noise and flashes lights when someone tries to sneak something out of that cookie jar. 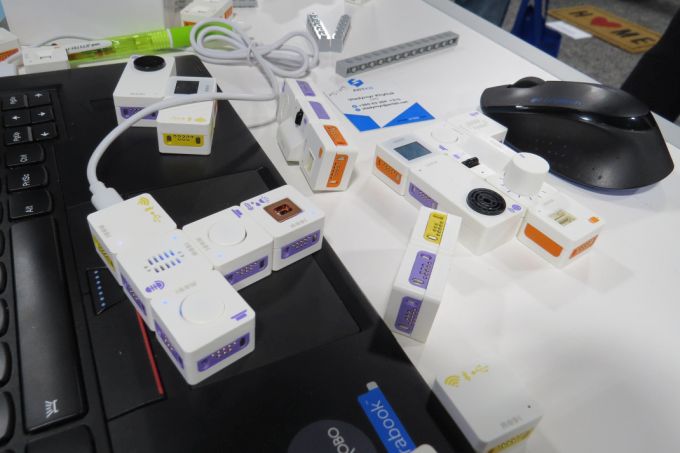 Luxrobo ran a successful Kickstarter campaign in 2016 for its modular IoT system and the plan is to start delivering MODI kits to backers by April. Eventually anyone will be able to buy MODI kits for around $99 and up.

That price gets you a beginner’s kit with 6 modules, but there are also higher-priced kits with additional modules. Luxrobo is also considering selling individual modules that allow you to buy just the components you want.

The modules snap together magnetically and communicate with one another through a set of wires that can run through wired and wireless (Bluetooth and WiFi) connections. And you can program the MODI system using the company’s drag-and-drop MODI Studio software.

I’m told the smartphone app is still a work in progress, but I was pretty impressed with the way Luxrobo representatives were able to control lights and roll up a window shade in a dollhouse with the tap of a button on a phone running the pre-release app. The dollhouse also had an LED light set up to a sensor so that the light glows red when someone leaves the toilet seat up.