There are two different types of apps that run on Windows 8 devices. There are full-screen apps that use the “Modern” user interface and which you can download from the Windows Store. And there are desktop-style apps that look like software you’ve run on every version of Windows up until now.

Modern apps are touchscreen-friendly and support new gesture-based navigation such as pulling down from the top of the screen to close an app, or swiping from the left edge to switch between apps. But these apps aren’t as easy to resize or reposition on your screen as classic desktop-style software.

But it turns out there’s an app for that. 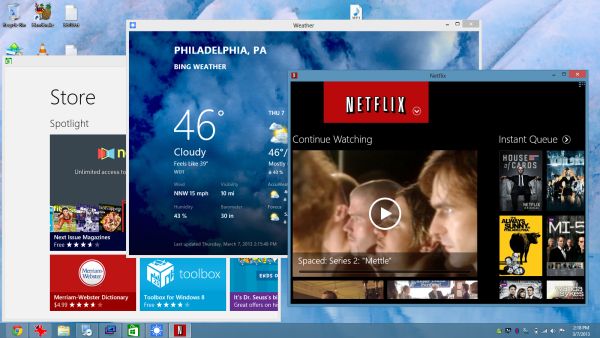 Stardock has released a public beta of a new app called ModernMix which lets you run Modern apps as if they were standard desktop apps. Each app can open in a resizeable window which you can move around the screen any way you like.

You can always flip back and forth between full screen and windowed mode by pressing a hotkey — the default is F10. And you can choose to only open apps in windowed mode if you launch them from the desktop if you like. That way apps will run as Modern apps when you bring them up from the Windows 8 Start Menu, but if you launch them from a desktop shortcut or by using a third-party Start Menu replacement (Stardock makes one of those too), you’ll be able to treat them like classic Windows apps. 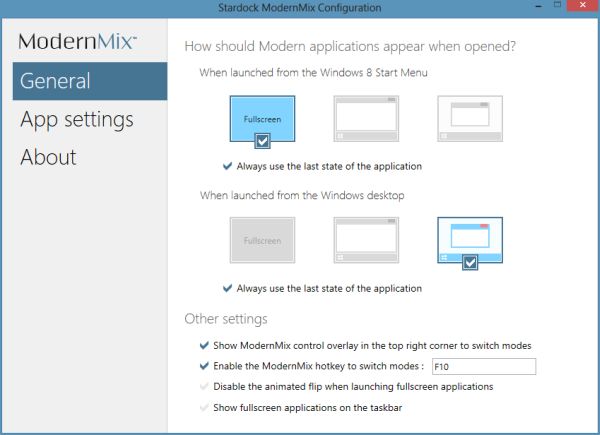 All the Modern apps I’ve tested so far have looked at least as good in a small window as they do in full-screen mode. Interestingly, Windows 8 still treats these apps a little differently — if you swipe from the edge of a touchscreen or touchpad you’ll be able to cycle through your currently running Modern apps. But all of your classic Windows apps will be grouped together under “Desktop.”

In other words, I have a few windows open in my desktop including Chrome, Irfanview, and the ModernMix settings app – but using the Windows 8 app-switching gesture cycles through Netflix, the Windows Store, Weather, and Desktop.

If I use Alt+Tab instead of an edge-swiping gesture I can cycle through all of those apps and Chrome and Irfanview.

ModernMix is an interesting option for folks that really hate the Windows 8 Modern user interface, but who still want to access some of the Modern-style apps such as the Netflix or Kindle apps, for instance, or some of the games from the Windows Store.