Apple offers a line of tablets for $299 and up. But Apple’s iPads all run the same operating system as the company’s iPhones. If you want a tablet that runs OS X you’ll need to build your own… or pay someone else to do it.

This summer a company called Modbook launched a Kickstarter campaign for the Modbook Pro X. For $1999 they would take apart your MacBook Pro and turn it into a high-end tablet. Pay $3999 and they’ll buy a MacBook Pro and convert it for you.

Sound like a tough sell? It is… but that didn’t stop the team from raising more than $300,000 on Kickstarter and more than doubling their original goal.

In fact, most of the people who backed the Kickstarter project with enough money to get a Modbook Pro X spent over $5,000 to get premium options including 16GB of RAM, a 512GB solid state drive, and NVIDIA GeForece GT 750M graphics.

Didn’t get a chance to reserve a Modbook Pro X through Kickstarter? For the next few weeks the company is taking “last call” orders at its website.

While a ModBook Pro X costs 2-4 times as much money as most ultrabooks, some folks such as digital artists might be able to justify the high price simply because there’s nothing else quite like a ModBook Pro X.

The converted MacBook features a 15.4 inch, 2880 x 1800 pixel display, an active digitizer and pressure-sensitive digital pen, an Intel Core i7 Haswell processor, optional NVIDIA graphics, a keyboard stand, and optional eyes-free keybars, which consists of a split keyboard positioned on the back of the tablet so that you can type while holding the tablet in both hands.

If Apple ever actually decides to sell an OS X tablet, it’ll probably be considerably cheaper. Until then, Modbook offers a solution for folks who might not be able to build their own. Since the conversion process voids your Apple warranty, Modbook provides its own protection plan. 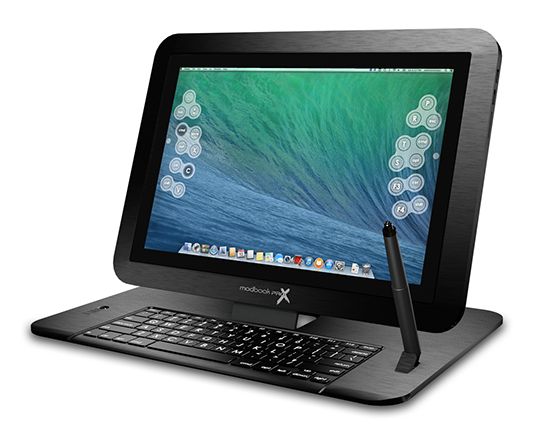