Apple already has a little tablet called the iPad, and the company seems pretty happy selling it for $399 and up. But the iPad runs iOS, an operating system designed to run finger-friendly phone and tablet apps.

If you’re looking for a tablet that runs OS X and can handle desktop apps including Photoshop and Lightroom… well, Apple doesn’t offer anything like that.

But this fall a company called Modbook will. 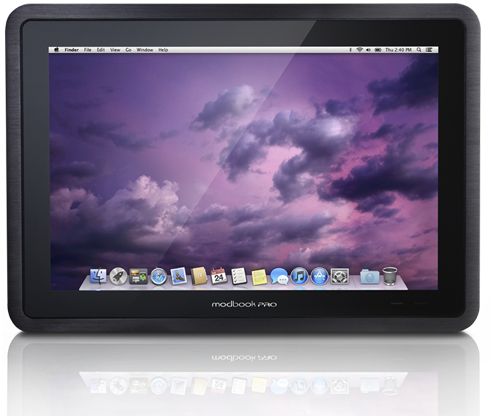 The Modbook Pro is basically what you get when you disassemble a 13.3 inch MacBook Pro and put it together again in a tablet-sized package without a physical keyboard. The Modbook Pro also includes a Wacom Active Digitizer for pressure-sensitive writing, drawing, or interacting with the operating system.

A few years ago a company called Axiotron offered a similar product, but after running into financial problems that company disbanded. The new Modbook Inc rose out of its ashes.

The tablet has a 63.5 Whr battery for up to 7 hours of battery life.

The folks at Modbook Inc have a history of working with Apple to make sure this type of product doesn’t infringe on any of Apple’s intellectual property.

While pricing hasn’t been revealed yet, I wouldn’t expect the new Modbook Pro to be cheap. A new Macbook Pro costs at least $1199 – and that’s before it’s been disassembled and reassembled as a tablet, a process that can add a few thousand dollars to the price tag.

In other words, this is a product aimed at graphic artists and others who are willing to pay a premium price for a very specialized piece of hardware.

I’m sure Apple could make its own OS X tablet and sell it for a much more reasonable price. But since Apple doesn’t seem interested, I suppose it’s nice to see companies like Modbook Inc step up.

The Modbook Pro also supports Boot Camp, which means you can install Windows alongside OS X. But there are already plenty of Windows 7 tablets which are probably far less expensive. This tablet’s appeal is that it runs OS X (and doesn’t require you to install your own bootleg copy of the operating system).

via Engadget and 9 to 5 Mac