Once upon a time, in a world without an iPad, Mac users dreamed about a tablet running OS X. And Axiotron decided to make that dream a reality by taking MacBook Pro laptops, ripping them apart, and putting them back together again as tablets called Modbooks.

It’s been a few years since the last Modbook was released, but now the developers are getting ready to release a new Modbook Pro in November. The only catch? It’ll cost as much as 7 iPads. 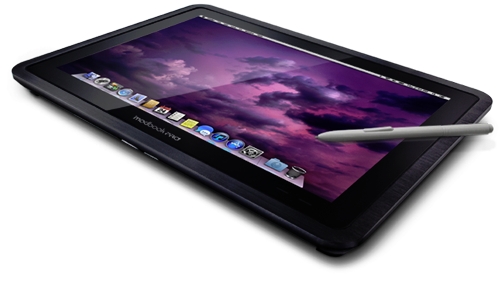 The tablet is literally what you get if you take apart a MacBook Pro laptop, remove the keyboard portion, stuff the guts behind the screen, and add an active digitizer to support a digital pen.

It’s based on the latest 13.3 inch MacBook Pro, and has the same display and runs OS X 10.8 Mountain lion. The base model has 4GB of RAM and a 64GB solid state disk.

Update: The company has upgraded the memory and storage for the base model to 8GB and 128GB, respectively. The starting price is still $3500.

Upgrade options include a 2.9 GHz Core i5 CPu, up to 16GB of RAM, and up to a 480GB solid state disk. Unfortunately any of those options will drive up the price even higher.

The tablet has a 1280 x 800 pixel display, and the digitizer supports up to 512 levels of pressure. In other words, the Modbook Pro is most likely to appeal to graphic designers, artists, and other folks willing to pay a premium price to write and draw directly on the screen of an OS X machine.

But with prices starting at $3499, I have to wonder how many of those people are out there. That price would have been a tough sell 4 years ago when everyone expected Apple prices to carry high price tags… and Apple didn’t make its own tablets. In a post-iPad world, $3499 seems even more expensive (even if this device is capable of much, much more than a typical iPad or Android tablet).

7 replies on “Modbook Pro ships in November: $3499 tablet made from MacBook parts”