Developer Paul O’Brien’s MoDaCo.SWITCH software lets you run two different Android operating systems on the same device, toggle between one and the other, and share data and apps across both devices.

He released SWITCH software for the HTC One in July, letting users switch between HTC Sense and stock Android software. Now he’s released the first beta builds of SWITCH for the Samsung Galaxy S4, allowing users to run TouchWiz or reboot into the Google Edition software for Samsung’s flagship phone.

You can find more details in the MoDaCo forums, but right now the only people who can try out the beta release are folks who backed the IndieGoGo campaign to raise money for the project. 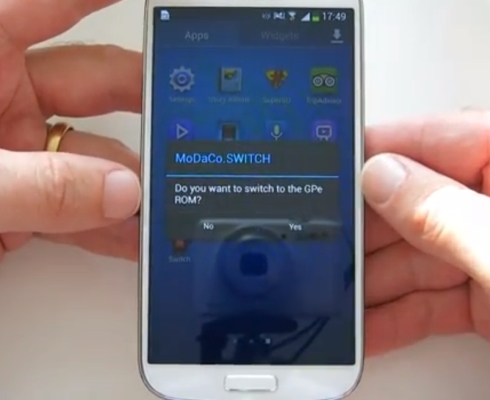 Both the HTC One and Samsung Galaxy S4 have something in common: While they ship with custom versions of Android that have been skinned by device makers, you can also buy versions of these phones running something much closer to Google’s version of Android by purchasing from the Google Play Store.

Hackers have already figured out how to get the Google Play Edition software running on versions of the phone that shipped with skinned software. O’Brien’s contribution has been to make it possible to get the best of both worlds by running both versions of Android on the same device and letting users choose which one to use.

In other words, you can get the stock Android experience when you want it, while using HTC or Samsung’s superior camera software when you’d like.

MoDaCo.SWITCH for the Galaxy S4 works on the GT-i9505 version of the phone, and while it’s initially only available to backers of the crowdfunding campaign, O’Brien plans to make it available to the general public eventually.

Oh — and it looks like O’Brien may not be finished finding new devices to develop SWITCH software for. He’s hinting that the next goal could be support for dual-booting stock Android and CyanogenMod on Google Nexus devices.

2 replies on “MoDaCo.SWITCH for the Galaxy S4 arrives, toggle TouchWiz and stock Android”