The HTC One is available with two different software experiences. Most models of the smartphone ship with HTC’s version of Android which features a custom skin called Sense. Or you can buy a model from the Google Play Store which comes without Sense, and instead offers a pretty much stock Android user experience.

If you root your device and unlock the bootloader, it’s possible to install a Google Edition ROM on a Sense phone, or vice versa. But now you can also get the best of both worlds: Developer Paul O’Brien has released a beta version of his MoDaCo.SWITCH software which lets you dual boot both operating systems on the same device. 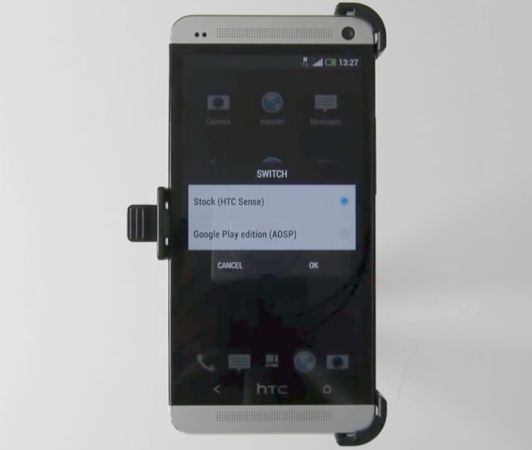 SWITCH lets you hit a button to reboot your device into the other user interface. That’s pretty cool. But what’s even more impressive is that your apps and data will be the same no matter which version of Android you’re using.

If you install an app in the Google Edition environment, the same app will be accessible when you boot into Sense. Data stays in sync as well.

That’s because you’re basically running two different Android environments, but your apps and data are stored in the same location, which makes them accessible in either environment.

While there are folks who prefer Google’s stock Android experience to HTC Sense, there are a few reasons you might occasionally want to boot into Sense. For instance, the Sense camera has more options and a better user interface. And I suppose there might be someone who thinks the BlinkFeed social news widget is a good idea.

O’Brien also plans to offer a custom ROM eventually which will combine some of the best features of the Sense and Google Edition experiences so you don’t have to reboot your phone to use the apps or services you want.

There’s also a crowd-funding campaign underway to raise enough money to pay for test devices so O’Brien can bring SWITCH software to the Samsung Galaxy S4 as well.

For now, you can download a public beta of MoDaCo.SWITCH for the HTC One at the MoDaCo forum.