Paul O’Brien’s MoDaCo.SWITCH software for the HTC One lets users toggle the Android environment on their smartphones. Want to disable HTC Sense and switch to the version of Android you’d get if you bought the phone from the Google Play Store? Just tap the switch button and your phone will reboot into that environment while preserving all of your apps and data.

Now it looks like O’Brien will be bringing a similar tool to the Samsung Galaxy S4. 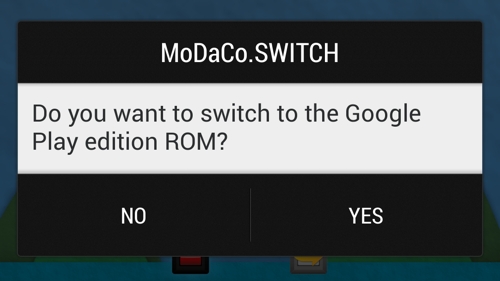 The Galaxy S4 is currently the only other phone you can buy with a choice of a standard Android experience or a custom version of Android developed by the handset maker. If you buy the phone from a wireless carrier or most stores, it’ll ship with Samsung’s TouchWiz software. Get it from Google and it comes with Google’s version of Android.

Having released a public beta of MoDaCo.SWITCH for the HTC ONE, O’Brien wanted to see if there was enough interest in similar software for Samsung’s flagship phone to help pay for development costs.

So he turned to Indiegogo to raise £1,000 to pay for phones that developers could use for test purposes. The campaign has reached (and surpassed that goal), which means that development has been green-lighted, although it may be a while before a SWITCH app for the Galaxy S4 is ready to go.