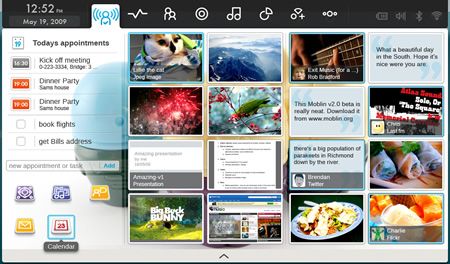 Moblin 2.0 is a custom Linux distribution designed specifically for netbooks. The last few times I’ve checked in on the operating system, it was in the early Alpha stages, and while it was capable of booting quickly, supporting most Intel Atom netbook hardware, and running a few apps, there was little to set it apart from other Linux distributions. But today saw the launch of Moblin 2.0 beta, which has a whole new user interface designed specifically for small screen, internet-centric computers like netbooks.

First, there’s a new home screen that replaces the typical desktop with an “M-zone” menu that provides links to your tasks, appointments, recent files, and status updates from your friends on social networks. Instead of a start or program menu, there’s a toolbar that appears near the top of the screen when you scroll your mouse toward it. The toolbar provides access to your settings, applications, and so forth.

Moblin is designed to run on Intel Atom powered netbooks with low screen resolutions. That means it’s optimized to boott quickly, help prolong battery life, and all the menus and programs fit on a 1024 x 600 pixel or smaller screen. There’s a custom web browser that’s built on Mozilla Firefox, which includes Opera Speed Dial-style thumbnail shortcuts for your favorite web pages. And there’s a custom media player which uses a Firefox 3-style search bar to easily locate your music, videos, and photos.

All told, Moblin 2.0 beta looks a lot more exciting than the earlier Alpha versions. I’m not going to have time to install it and test it out myself for a little while, but if you have a chance to play with it, let us know what you think in the comments. You can also run Moblin 2.0 beta from a LiveCD, which means you don’t need to install it on your netbook to try it out.

You can watch a video overview of Moblin 2.0 beta after the break.