A handful of TV boxes featuring Rockchip’s new ARM Cortex-A17 quad-core processor have popped up recently, but the MK903V is one of the first that’s small enough to fit in your pocket.

The device looks a bit like a chunky USB flash drive, except it has an HDMI port on one end and an antenna on the other. Under the hood, it’s powered by Rockchip’s RK3288 processor.

Like a number of TV sticks launched in the past few years, all you need to do is connect the MK903V to your TV’s HDMI port, plug in a power source, and you can use it to run Android apps on your TV.

The box is available for purchase from AliExpress for $122. 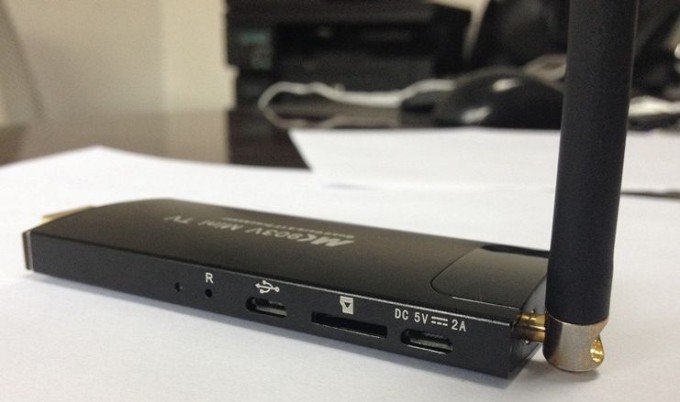 Up until recently I’ve referred to devices like this as Android TV sticks or Android TV boxes… but Google’s sort of taking back the idea of “Android TV” and plans to launch its own TV software later this fall. I don’t think that’ll stop Chinese device makers from offering devices like the MK903V which basically feature the phone/tablet version of Android with a few modifications to make them more TV-friendly. Google plans to exercise tight control over the Android TV experience and probably won’t allow device makers to use the software unless they gain approval from the company.

So now it’s probably just best to think of this sort of device as a “TV stick,” especially since hackers have a way of figuring out how to replace Android with Linux.