Rikomagic launched a new TV box with a Rockchip RK3288 processor and Google Android software this summer. It’s called the MK902 II and I’ve got one sitting on my desk waiting for me to find the time to put it through the paces.

While the box is designed to let you run Android apps on a TV, it’s basically a tiny computer… and if you don’t want to use Android there’s a Linux model. 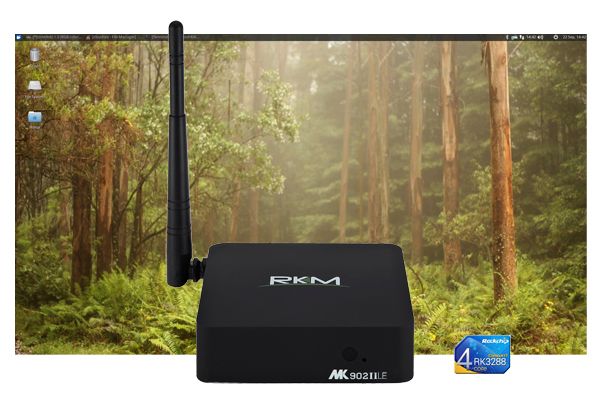 That price may seem a bit high when you can get an Android model for $115. But at least you won’t have to install Linux yourself, and Rikomagic UK tells me there are a few small differences in the hardware for the Linux Edition model.

It ships with Xubuntu 14.04, which is basically Ubuntu Linux with the Xfce desktop environment.

Rikomagic UK offers a handful of other ARM-based mini PCs with Linux, but this is the fastest model to date. It reportedly boots to a desktop in just about 10 seconds and it supports virtualization software that lets you run apps compiled for x86 processors to run on this ARM-based system. That lets you run Linux apps that wouldn’t otherwise be available including Skype. It also opens the door to running some Windows apps with WINE.

What you don’t get is support for hardware-accelerated video playback, so if you want to use a box like this as a media player you may have better results with Android than with Ubuntu.

You can find more videos of the MK902 II LE in action at the Rikomagic UK forum.