The MK812 is basically a mini-computer with a dual core processor and Android operating system. It’s about the size of a USB thumb drive, but you can plug it into a TV to run Android apps on a big screen, or basically treat your TV like a computer.

We’ve seen a lot of these devices in recent months, but the MK812 has a few features that make it stand out, including Bluetooth, a built-in webcam, and an external antenna which should help boost wireless reception. 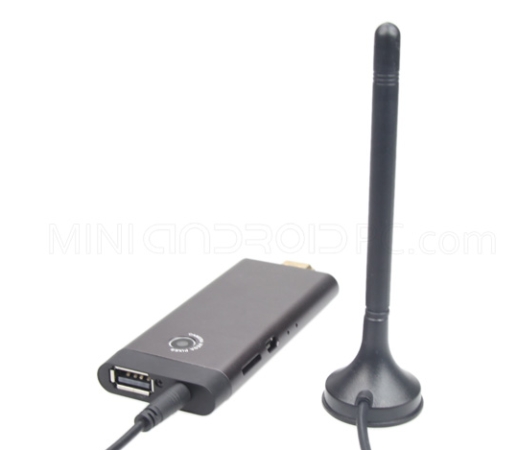 Manufacturers seem to be on a quest to see just how many features they can pack into these tiny Android TV sticks. Less than a year ago you were lucky to find a model with a slow processor, little RAM, storage, and WiFi.

But many of these little devices have suffered from poor WiFi reception, which makes them kind of tough to use for watching Netflix or surfing the web on your TV. There’s only so much you can do with an Android device that doesn’t maintain a stable internet connection.

I haven’t personally tested the MK812, but the inclusion of an external antenna means it should at least theoretically get better WiFi reception than most Android TV sticks.

The device features a Rockchip RK3066 dual core processor, Mali 400 graphics, 1GB of RAM, and 8GB of built-in storage. It has an HDMI connector which lets you plug the stick directly into your TV. The webcam is a 2MP camera.

The MK812 appears to be based on the same design as the Kimdecent B12, but that model doesn’t come with an external antenna.

While this Android TV stick has similar hardware to many others we’ve seen in recent months, it doesn’t seem to handle custom firmware developed for those devices very well — ArmTvTech forum member darvon1 reports that he’s only been able to get WiFi to work while using the MK812’s stock firmware.

MiniAndroidPC is selling the MK812 for $75 per unit.