The MK802 is a tiny computer that you can plug into a keyboard, mouse, and TV to run Android, Ubuntu, or other operating systems. It’s proven popular with tinkerers due to its size, low power consumption, and low price — you can pick up an MK802 for around $70.

Now there’s a new model making the rounds. It’s called the MK802 II, and it features more USB ports and a built-in HDMI connector that lets you plug the device directly into a TV or monitor without any extra cables. 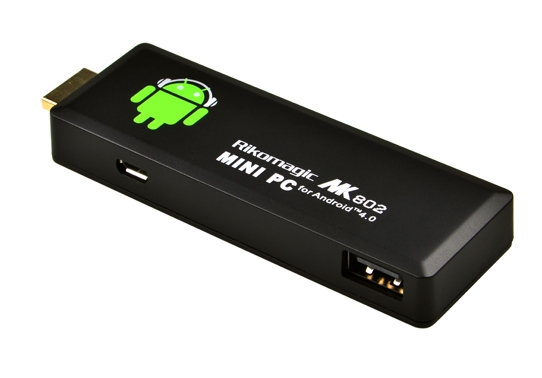 Like the original MK802, the new model has an Allwinner A10 ARM Cortex-A8 single core processor, Mali 400 graphics, and 4GB of storage. It comes with Android 4.0 preloaded on the internal storage and can access the Google Play Store.

The MK802 II also has a redesigned circuit board and a built-in power regulator which, among other things, should make it easier to overclock, underclock, and shut down the device properly. If you’ve ever tried turning off the original MK802, you’ll know that it just sort of freezes when it gets a power-down signal. The only way to really turn it off is to unplug it… which can be somewhat problematic in some operating systems.

The package also includes a few cables and adapters including an adapter that will let you connect a full-sized USB cable to one of those micro USB ports.

Overall, the new model isn’t that much different from the original. It still has a relatively slow, low power processor and limited storage. But that’s not necessarily a bad thing.

Part of what made the original MK802 popular is that a range of Linux-based operating systems including Ubuntu and Fedora can run on devices with the Allwinner A10 processor. It’s also extraordinarily easy to run alternate operating systems on the MK802, since it can be booted from a microSD card. All you have to do is load Ubuntu or another operating system on an SD card and insert it into the card slot before turning the computer on.

You can find more photos at the Rikomagic UK forum.