The MK802 is an inexpensive device with an Allwinner A10 processor, 512MB of RAM, and 4GB of storage. It looks like a USB flash drive, but it’s basically got all the workings of a tiny computer designed to run Google Android — including a USB port which you can use for a keyboard or mouse and an HDMI port for a TV.

Update: My Mk802 has arrived, and I’ve started to put it through the paces.

Since we first spotted the device at AliExpress last week it’s gotten an awful lot of attention, and more than 600 units have been sold — and a number of other sellers have started taking orders for nearly identical devices with prices starting at $65.

The original seller plans to start delivering shipments today, and I just received confirmation that my order has shipped. But the company has already posted links to two YouTube videos showing what comes in the box and how the MK802 works when connected to an external display, a wireless mouse, and a WiFi internet connection.

The MK802 is positioned as an Internet TV device which runs Android — and it looks like it does a pretty good job with video playback. Movies seem to play back smoothly on an HDTV, and there’s even an integrated movie store — although the navigation seems to be in Chinese.

Basic Android apps including the web browser and Angry Birds Rio are also shown to work reasonably well — although they were clearly designed for touch input rather than a mouse.

The MK802 supports 802.11b/g/n WiFi and has an ARM Cortex-A8 single core processor with support for HD video playback in a variety of formats including MP4, H.264, and WMV.

Not only does the little computer ship with Google Android 4.0 — but it also appears to have the Android Market pre-installed. I suspect the manufacturer loaded the Market without Google’s permission… although I suppose it’s always possible that this really is a Google certified device. Google isn’t nearly as strict with its requirements for Android 4.0 devices as it was with Android 3.0.

The MK802 has a mini USB port which is used for connecting the device to a PC. There’s also a USB host port which is what you use to connect a mouse. Theoretically once you’ve got a mouse and monitor plugged in, you should be good to go — but a USB keyboard is also a probably good idea if you don’t want to use a mouse and on-screen keyboard to type. So you might also want to connect a USB hub to turn that single USB port into 4.

The MK802 also has a DC jack for charging and microSD card slot. The video and retail listing also show a mini USB cable, USB adapter, charging cable, and HDMI cable with the device — although I’m not 100 percent certain all of these items come in the package.

If you didn’t get your order in before the store sold out, the seller is taking pre-orders for a new shipment which is expected to arrive on June 10th. Or you could try your luck with one of the many other sellers offering the MK802. 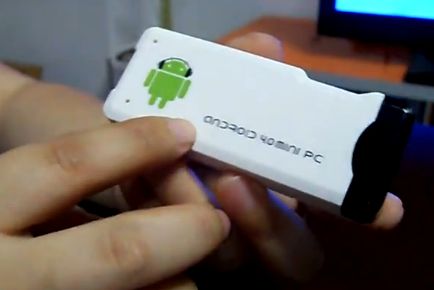