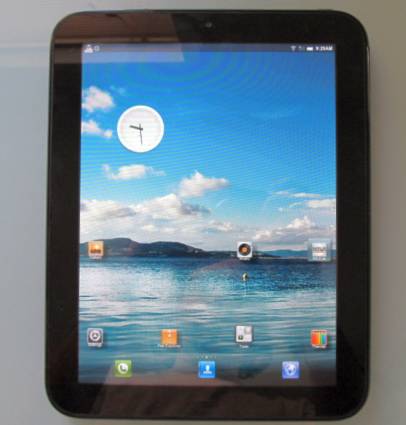 There’s a new version of Google Android available for the HP TouchPad. While people have been happily loading CyanogenMod 7 on the HP tablet for the past few months, you can also now install a custom ROM based on MIUI.

The HP TouchPad ships with webOS software, but installing Android allows you to run thousands of apps designed for Google’s mobile operating system. While the CyanogenMod software is based on the Android Open Source Project and gives the TouchPad a very typical Android look and feel, MIUI includes a custom app launcher, custom home screen, custom settings menus, and a number of custom applications.

Overall, MIUI makes Android look a little more iPhone-like… but that’s probably an oversimplification. Really, what the MIUI developers have done is take Google Android and give it a new skin and new apps to give it a visual makeover.

The version of MIUI which is available for the HP TouchPad is still in the pre-alpha stages. Most of the important functions work, including audio, touch input, WIFI, and Bluetooth. But there’s currently no on-screen menu for home, back, or menu functions and there are a number of bugs.

Still, if you want to check out the first version of Android that isn’t CyanogenMod, it’s pretty easy to do.

If you already have CyanogenMod installed on your TouchPad all you have to do is:

It’s probably a good idea to use ClockworkMod to create a complete backup of your system first — because there’s a good chance you will want to revert to CyanogenMod after testing MIUI.

If you haven’t already installed CyanogenMod, you can follow our instructions for doing so — but instead of using “update-cm-7.1.0-tenderloin-a3-fullofbugs-signed.zip,” you’ll use “MIUI.us_tenderlion_1.12.9_Eng_Deo_ZipA_Signed_scott951.zip.” The rest of the steps should remain the same.

Since you’re using the CyanogenMod tools to load the operating system, you’ll still see the CyanogenMod logo before MIUI boots. You’ll also want to make sure to install Moboot and ClockworkMod.

If you do want to spend some time playing with MIUI, here are a few tips I’ve found: