Chinese company Xiaomi has made a name for itself in recent years by offering high quality phones at low prices. But even before launching its first phone, Xiaomi earned a bit of a reputation for its MIUI software which puts a fresh coat of paint on Google Android with custom icons, menus, and apps.

Users have been porting MIUI firmware to run on dozens of Android phones for years, and it’s the software that ships on Xiaomi’s own phones. But now you can get the MIUI look and feel on your phone without rooting, unlocking the bootloader, or replacing the Android software that came with your device.

Xiaomi has released a beta version of an MIUI app suite for just about any phone running Android 4.0 or later. 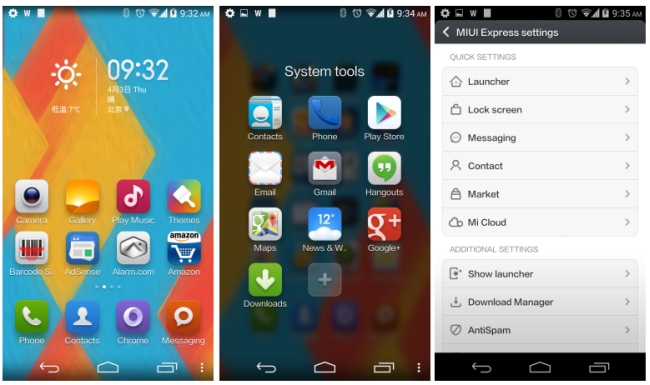 The MIUI Express app is more than just a home screen launcher. While it replaces your home screen and app drawer, it also includes replacements for the stock phone dialer, contact, SMS app, lock screen, and other apps.

MIUI doesn’t include an app drawer. Instead all of your apps are placed on the home screen, much the way they would be on an iPhone, but unlike iOS, MIUI lets you organize icons and widgets any way you’d like.

There are also links on the home screen to the Mi Cloud cloud storage service, the Xiaomi/MIUI App Market, and a Toolbox for adjusting yoru settings, hiding apps from the home screen, and more.

The software is still in beta, so don’t be surprised if you see a mix of Chinese and English or encounter other bugs.