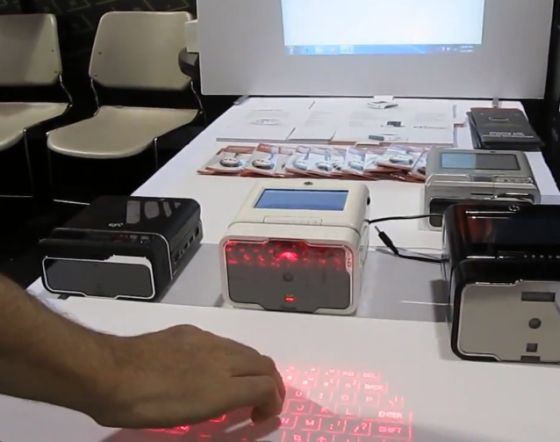 CTX Technologies is showing off a tiny desktop computer called the MISEETX that has two built-in projectors. One can project an 800 x 478 pixel display on a screen or wall. The other projects a virtual keyboard on a desk or tablet.

The device also has a built-in 4.3 inch LCD touchscreen display and a built-in battery. When the display projector is on, it should get about two hours of battery life, but that stretches to 6 hours if you just use the LCD.

CTX won’t be selling the MISEETX under its own name, but is instead making the device for partners. A major electronics manufacturer has already placed an order for 250,000 units and they should hit the streets around April for about $600. 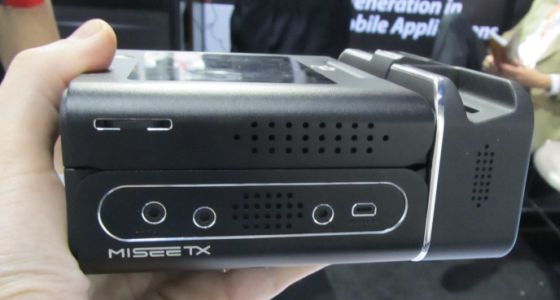 There’s also HDMI input and audio input. You can use the MISEETX as a regular projector. Just hook up a Blu-ray player, game console or other device and you can use the PC like a TV projector.

The top panel is also adjustable so you can project video at an angle, or even up on the ceiling. There are stereo speakers on the side of the device and volume buttons and other controls on the top. 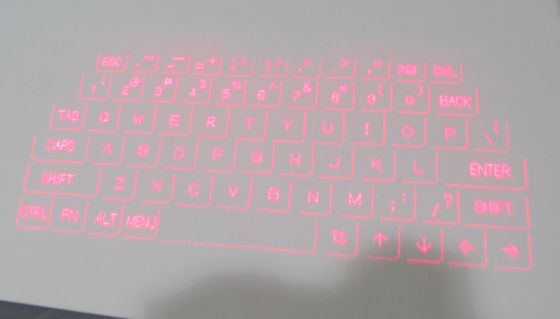 If you find you can’t stand the projected keyboard, you can plug in a USB keyboard or use a Bluetooth keyboard. But typing on a flat tablet isn’t nearly as bad as I would have expected. You’ll have to look down at your fingers until you get used to the system, but once you’re comfortable with the layout, if you’re a touch typists you should be able to type without looking.

You can also press a special key combo to treat the keyboard as a mouse or touchpad.

Right now the keyboard is a kind of obnoxious red color, but CTX says the final production units will project a slightly more pleasant green keyboard.