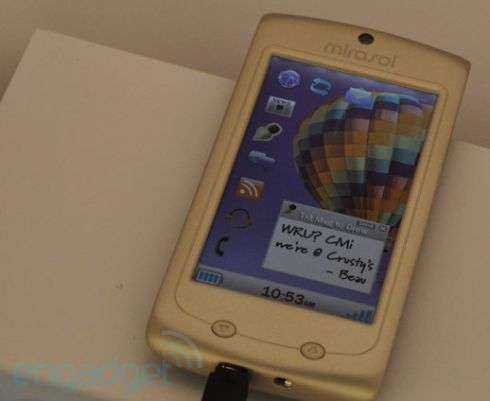 Mirosol has been showing off its low power reflective sunlight readable color display technology for a couple of years, but so far no actual products using the screens have shipped. Now Engadget has the story on why that is.

In a nutshell, Mirosol’s displays don’t require a backlight and don’t draw much more power than an E Ink screen, but they can display color outdoors and handle video playback, making them much more versatile than E Ink displays. Unfortunately Mirosol displays don’t look nearly as good as a standard LCD unless you provide a sidelight which increases power consumption. So while you can use the technology in a phone or tablet, it makes a lot more sense for eBook readers right now.

Back in 2010, Mirasol had a number of partners ready to release products — but then Apple launched the iPad and forced manufacturers to rethink their tablet and eReader strategies. The Apple iPad has turned out to be a very popular device for reading eBooks, even though it has a backlit color LCD display — the type of screen E Ink enthusiasts thought nobody wanted.

That said, Mirasol promises that at least one company will release a device with its display technology this year. The company is also showing off a new smartphone prototype, showing that sunlight readable screens aren’t just for eReaders anymore… if they ever were.