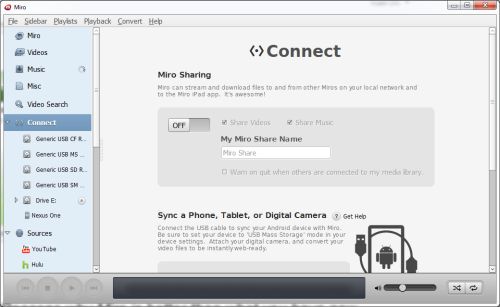 The Participatory Culture Foundation has released Miro 4.0. While earlier versions of this open source media player were aimed at making it easier to find and download videos and watch internet video streams, Miro 4.0 aims to be a complete replacements for iTunes or Windows Media Player. It can handle audio and video podcasts, includes the ability to purchase media from Amazon and other digital media stores, and allows you to synchronize your media with an Android phone or tablet — if you can get it to work.

Unfortunately when I tried installing the app on my desktop computer running Windows 7 Home Premium, I couldn’t get past the setup screen because I had a series of pop-up errors telling me that the app couldn’t find a hard disk. Hitting cancel did no good at all.

Update: The developers have uploaded Miro 4.0.1 to the server, and it resolves all of the error messages I encountered, although you still have to mount your Android device’s SD card any time you want to sync media with your computer.

I’ve used Miro in the past and always found the app to be promising but not all that useful for my needs. Now that the developers are positioning the app as an all-purpose tool for managing and playing most media formats I was really looking forward to giving it another try. 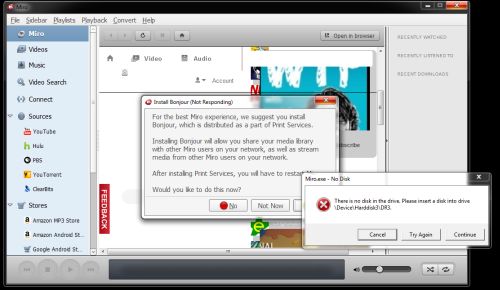 The app did install properly on a Windows 7 laptop — but I saw a number of graphics glitches on the home screen. When I plugged in my Android smartphone, I got the same annoying error messages that had plagued the desktop PC installation until I realized that I needed to mount my phone’s SD card before using Miro’s new “connect” features. It’s not intuitive, and it’s not exactly the kind of synchronization I’ve come to expect from iTunes. 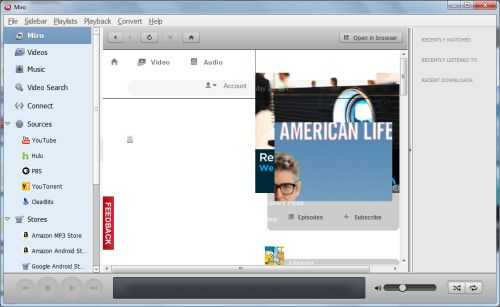 Once Miro 4.0 did recognize my Google Nexus One, it was able to scan the phone’s SD card to find music, podcasts, and videos — but it also found other sound files on the device including custom ringtones and “Facebook Pop” which I can only assume is a sound effect from the Facebook app. 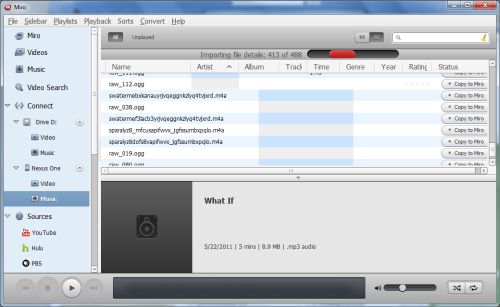 I really want to like Miro 4.0 because I love what the Participatory Culture Foundation is trying to do with this cross-platform media app for Mac, Windows and Linux. But it’s hard to like an app if you can’t get the thing to work.