The Raspberry Pi 4 Model B is a fairly capable single-board computer in its own right, but it has a fairly limited number of ports and connectors. But the Raspberry Pi Compute Module 4 has the same processor and supports the same hardware and you can use it with carrier boards that give you more ports and other features.

Can’t find one that meets your needs? Maybe you can design your own. That’s what a Polish developer named Mirek did. His MirkoPC is a Raspberry Pi CM4 carrier board that basically turns the tiny card into a full-fledged Linux-compatible computer complete with multiple display outputs, plenty of USB ports, and even support for PCIe NVMe solid state storage.

You can’t buy one yet, but a handful of prototypes have been made and Jeff Geerling has posted some hands-on impressions on his website and in a YouTube video. 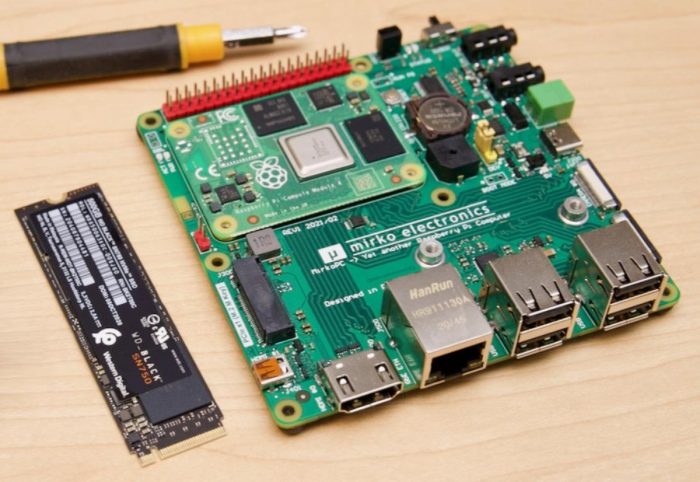 At the heart of the MirkoPC is Raspberry Pi’s tiny computer-on-a-card with quad-core ARM Cortex-A72 processor and onboard WiFi 6 and Bluetooth 5.0. But the carrier board extends its capabilities by giving you:

The board also has a digital to analog converter (DAC) for high-quality audio (up to 32-bit/384 kHz) and a headphone amplifier, an RTC clock with a battery, an infrared receiver for use with a remote control, statue LED lights, a power supply for a fan, and much more.

Measuring just about 3.9″ x 3.9″, the MirkoPC is a bit larger than a standard Raspberry Pi Model B, but a smaller than the motherboard most Intel NUC small form-factor computers.

While it’s not as powerful as an NUC, the Raspberry Pi Compute Module 4’s Broadcom BCM2711 processor is the fastest Raspberry Pi chip to date. And you can buy Compute Modules with up to 8GB of LPDDR4-3200 memory and up to 32GB of onboard eMMC storage. With this carrier board, you can also skip the onboard storage and boot from a microSD card or SATA or NVMe SSD.

As Geerling points out, one down side to the current version of the MirkoPC is that the power supply only provides up to 15 watts. While that’s more than enough for the Compute Module’s needs, you may run into trouble when using an SSD or other peripherals that also draw power. Perhaps that issue will be resolved in a future version of the board.

Once the kinks are worked out, the developer is considering running a crowdfunding campaign for folks that would like to order their own MirkoPC. There’s no word on when that would happen though, or how much the board would cost. But if you’re interested, you can reach out to Mirek via the MirkoPC HackADay project or keep up with the project on GitHub and Twitter.

Or if you’re looking for a similar Raspberry Pi CM4 carrier board that’s a little smaller, has a few less ports, but which does also support PCIe NVMe storage, there’s the TOFU carrier board, which is available for pre-order for about $110. The next batch is expected to ship in May, 2021.