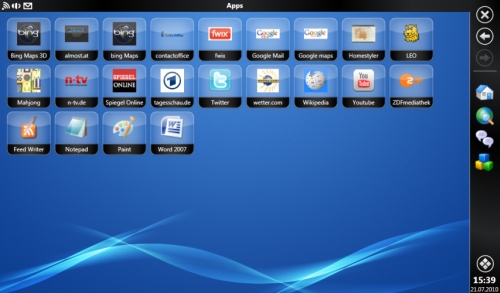 While Microsoft has been offering versions of Windows with optimizations for touchscreen displays ever since Windows XP Tablet edition, the truth is that the whole start menu, taskbar, and itty bitty close/minimize/maximize buttons in Windows weren’t really designed for touch input. But there are a number of companies coming up with software designed to run on top of Windows which makes the experience of using the operating system a little more… iPad-like.

One of the latest is Mirabyte, which is developing a UI called FrontFace for Windows tablets. FrontFace for netbooks and tablets isn’t available for download yet, but a preview version should be available within the next few weeks.

While some Windows overlays simply offer a finger-friendly program launcher, FrontFace seems to go a bit further by giving you large icons to close an application or perform other actions. The software also includes a number of original apps designed for touch input including a media player, YouTubeapp, and some games. There are also start page widgets for items including news, weather, and calendar appointments.

You can find out more at the FrontFace developer site.