The Mirabook is a device that looks like a laptop. But it’s not really a standalone computer. It’s meant to be connected to a smartphone, allowing you to run your mobile apps on a big display while using a keyboard and touchpad to control them.

First unveiled at the Consumer Electronics Show in January, the Mirabook is expected to ship in December… assuming the company behind the laptop dock manages to raise at least $50,000 through a crowdfunding campaign that kicked off this week. 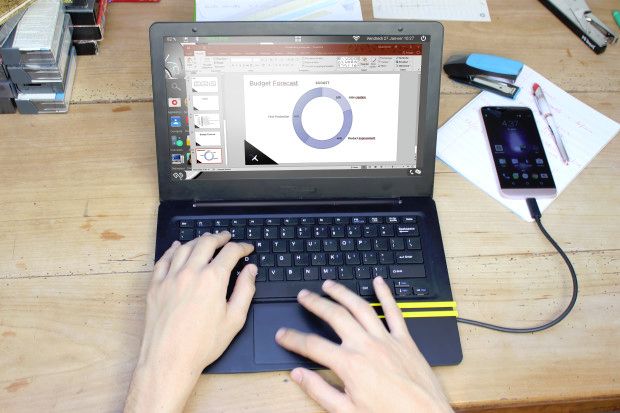 This isn’t the first laptop dock for phones we’ve seen. HP already offers one for its Elite x3 smartphone. Last year a model called the NexDock began shipping after a crowdfunding effort. And this summer a new model called the Superbook should hit the streets, following yet-another crowdfunding campaign.

So what makes the Mirabook special?

First up, this model has a 13.3 inch, 1920 x 1080 pixel IPS display. Second, it has a nifty design with a built-in USB cable that folds into the case when it’s not in use, and which you can pull out to plug into your phone when you need it. The design means there’s one less thing you need to carry around.

The device features an aluminum case, stereo speakers, a battery that you can use to power the system and charge your mobile device, a USB Type-A port, HDMI port, and USB Type-C port (for charging) as well as an SD card reader.

French startup Miraxess says the Mirabook is designed for use with smartphones, but it can also work with a Raspberry Pi, Intel Compute Stick, or other mini PCs.

The Mirabook connects to mobile devices using SlimPort technology, which allows you to connect Android or Windows phones from Samsung, LG, HTC, Microsoft, or Acer to the device.

Eventually Miraxess is hoping to add Miracast wireless display support as well, but the Mirabook doesn’t currently support that feature.

The Mirabook measures about 12.6″ x 8.7″ x 0.6″ and weighs about 2.2 pounds. Miraxess says the full retail price of its laptop dock is expected to be $299, but early backers of the Indiegogo campaign can reserve one for a pledge of $180.

In a few days the starting pledge level will go up to $199.

Or you could just opt for a Superbook. A full HD model is currently up for pre-order for $184, while the HD version is priced at $119. The prices for both models should go up by about $30 when the Superbook begins shipping in June.