It’s been about a year since Miraxess unveiled the first prototype of a laptop dock for smartphones called the Mirabook. The team followed up with a crowdfunding campaign in April, 2017 and now the team is getting ready to ship Mirabooks to backers in May, 2018.

The company is showing a near-final prototype at the Consumer Electronics Show in Las Vegas, and it looks… well, it looks like a laptop. But it’s powered by your phone. 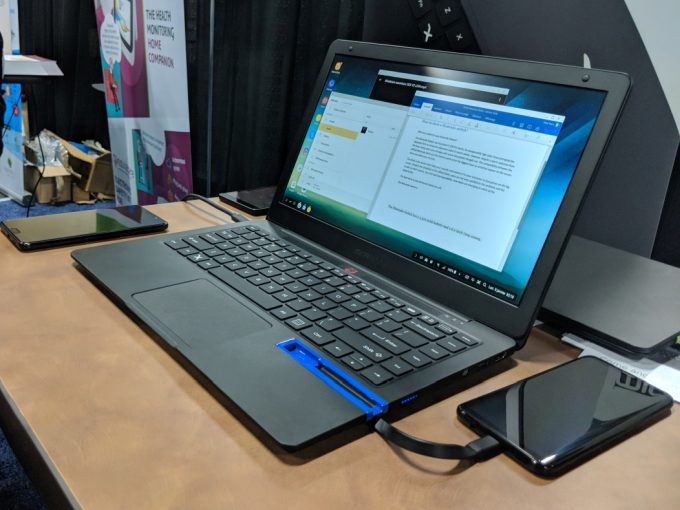 Here’s the idea. The Mirabook has a 13 inch full HD matte display, a touchpad, a keyboard, HDMI, and USB ports. It measures 6.3 inches thick and weighs about 2.8 pounds, and it generally seems like a thin and light computer. But it relies on your phone for memory, storage, processing power, and an operating system.

Just pull out the USB Type-C cable built into the laptop, plug it into a compatible phone, and you’ll be able to run Android apps in a desktop-like environment, with each app getting it own window that can be resized or moved.

You can use mobile versions of applications like Microsoft Word or Android versions of web browsers like Chrome or Firefox. This is still Android, so don’t expect to get all the features you’d get from desktop Windows or GNU/Linux apps, but on the other hand you don’t need to sync your data between two devices if you’re essentially using your phone for everything. The Mirabook just makes interacting with productivity apps more comfortable thanks to the big screen, full-sized keyboard, an touchpad, among other features.

Note that you’ll need a phone that supports DisplayPort output. Miraxess is showing off the phone with a Samsung Galaxy S8, a Huawei Mate 10, a Razer Phone, and a Microsoft Lumia 950. There are plenty of other phones that may not work, and Miraxess says that while some phones will let you pick up and use the phone while it’s docked, others will not.

Miraxess isn’t the only company working on this sort of laptop dock. But the company says it’s soliciting a little more feedback about the design at CES and hopes to finalize everything in time to meet its shipping goal of May.

One reply on “Mirabook laptop dock for smartphones coming in May”