Most headsets that allow you to strap your phone to your head are positioned as virtual reality devices that use your phone’s display and processing power to immerse you in a virtual world. But the Mira Prism is an augmented reality headset that uses an Apple iPhone as its brains. 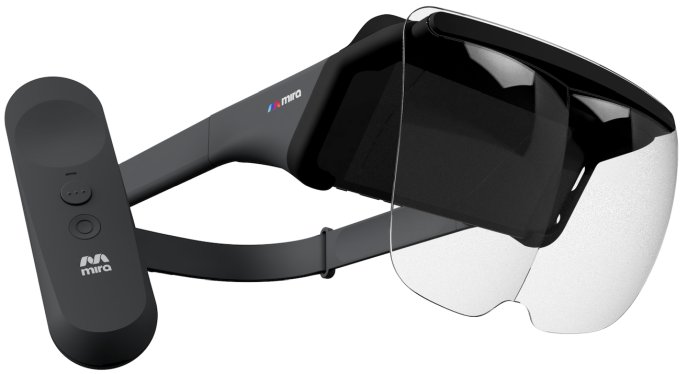 That means you can see virtual objects right in front of you… but you can also see the physical world around you. In other words, the Mira Prism offers offers a HoloLens or Google Glass-like experience, not an Oculus Rift or HTC Vive-like immersive experience.

But it’s cheaper than any of those devices. The Mira Prism is up for pre-order for $99.

There are a few caveats: the Prism isn’t expected to ship until the 2017 holiday season. It only supports iPhone 6, iPhone 6s, and iPhone 7. And it’s a product from a startup, so while this may not be a crowdfunding project, there’s always a chance of delays or other problems between now and launch day.

Prism can let you see real and mixed objects in the same view, and it’s said to feature 6 degrees of freedom optical tracking as well as a wireless controller with a gyroscope, accelerometer, touchpad, and buttons.

There are some limitations. The headset has only offers a 60 degree field of view. The iPhone has a lower-resolution display than top Android handsets, and the graphics will necessarily look a bit less vivid when reflected on a screen than they would using a Google Cardboard-style viewer. And of course you’ll need to use apps that are compatible with the Mira Prism.

While Apple’s ARKit is leading to some pretty nifty looking augmented reality apps for iPhones and iPads, those apps all rely on the rear cameras of those devices to created a mixed reality experience. The Mira Prism does it with mirrors and screens, so I wouldn’t expect ARKit-based apps to work out of the box.

The $99 price is also an introductory offer. The full retail price is expected to be $149 for the Prism headset, a remote control, and carrying case.