The MIPS Creator CI20 is a single-board computer with a 1.2 GHz dual-core MIPS32 processor.

Unlike some single-board computers aimed at developers, hackers, and the generally DIY-minded, the board features integrated WiFi and Bluetooth and well as Ethernet, HDMI, and SD card slots and a number of developer-friendly I/O connectors.

But there’s always room for improvement, and about a half year after introducing the first model, the folks at Imagination Technology have just launched a new version of the MIPS Creator CI20 which should offer stronger WiFi and Bluetooth performance. 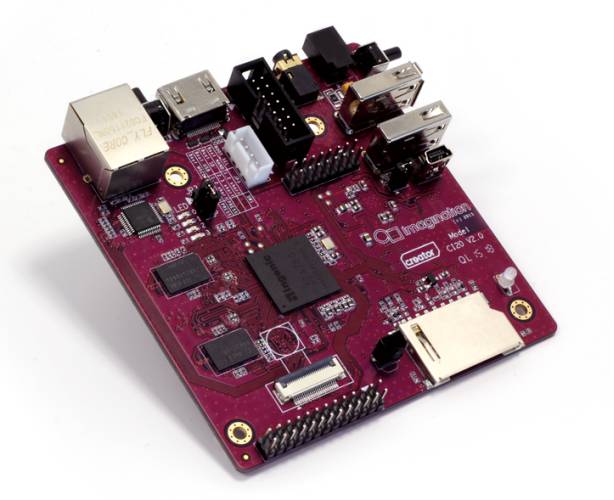 That’s because there’s a new printed circuit board layout that should offer better signal strength.

The new board also has more mounting holes and a rectangular shape, which makes it easier to design your own case or find other ways to mount the Creator CI20 to external hardware.

Other specs remain the same: the new model still has 1GB of RAM, 8GB of built-in storage, PowerVR SGX540 graphics, and an Injenic JZ4780 processor.

It’s that processor that really sets the Creator CI20 apart from most of the other low-cost, small form-factor single-board computers on the market. While devices like the Raspberry Pi 2, Cubieboard4, and CHIP all use ARM-based processors, the Creator CI20 uses Imagination’s MIPS architecture. The board is aimed at the same folks who might be attracted to those other projects, but part of Imagination’s goal is to get more people interested in developing for MIPS.

The board is available for pre-order from the Imagination Store for $65. It should ship in June.

One reply on “MIPS Creator CI20 dev board gets a design refresh, wireless improvements”