The MintBox line of mini PCs are small, fanless desktop computers that come pre-loaded with the Linux Mint operating system. And the latest version is the most powerful (and expensive) model to date.

First announced in July, the MintBox 3 is now available for purchase from the Fit-IoT website for $1399 and up, and the little computer should begin shipping to customers in January. 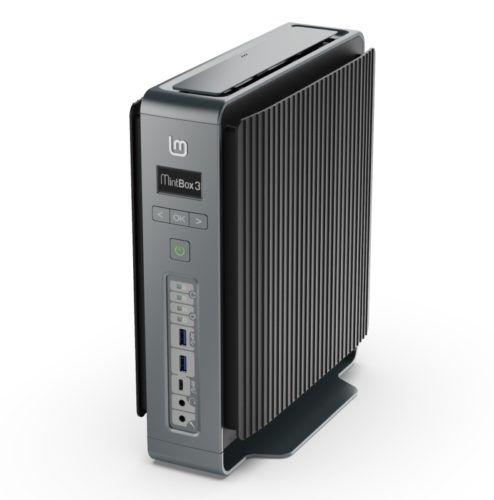 As usual, the latest Mintbox is a result of a partnership between the Linux Mint team and fanless PC maker CompuLab. But this time instead of building a system around one of the company’s small, low-power, and relatively inexpensive systems, the partners opted for a version of the high-performance/high-priced Airtop3.

That means you’re looking at a 12″ x 10″ x 4″ desktop computer with an aluminum chassis and passive cooling system that dissipates heat from hardware that can consume up to 300 watts of power.

Other features for both models include dual Gigabit Ethernet ports, support for multiple 4K displays (3 for the MintBox 3 and 7 for the MintBox 3 Pro), WiFi, Bluetooth, and a whole bunch of USB ports, and audio jacks on both the front and back of the computer.

The memory and storage are user upgradable, with the system supporting up to 128GB of memory, up to two NVMe SSDs and up to 4 SATA hard drives and/or SSDs.

In other words, the MintBox 3 is probably overkill for most folks looking for a small, quiet Linux computer. But it sure looks like a nice option if you can afford it — the Airtop3 gets pretty strong reviews, and the MintBox 3 is basically the same computer with the MintBox name slapped on the front and Linux Mint pre-loaded.