Android TV box maker MINIX has earned a reputation (among the small group of folks who track these things) for offering products with reliable performance and decent specs. Now the company is introducing two new boxes designed to let you run Android apps on your TV, and they’re the most powerful MINIX boxes yet.

The MINIX Neo X8 and Neo X8s are both powered by versions of the Amlogic S802 quad-core processor with Mali-450 graphics. 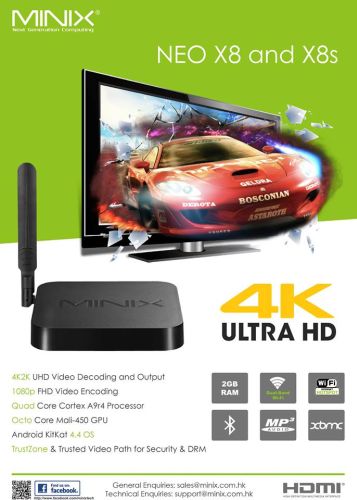 The box runs Android 4.4 KitKat and comes with a MINIX edition of the XBMC media player.

If you want a little more for your money, the Neo X8s is mostly the same, but it features 16GB of storage, dual-band WiFi, and an Amlogic S802-H chip with Dolby Digital audio.

MINIX is also introducing a new Neo M1 wireless air mouse that you can use as a remote control for its TV boxes or for just about any Windows, Android, OS X, or Linux box. It comes with a USB plug-and-play receiver, has a gyroscopic sensor, and features Android keys, direction buttons, and media buttons.

The company hasn’t yet revealed the price or launch date for its new TV boxes or remote control.