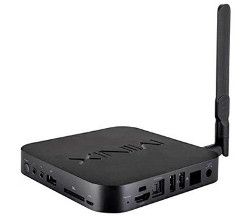 What makes the Neo X8s a little different is the Amlogic S802-H processor with Dolby Digital Audio and the extra storage: it comes with 16GB of built-in storage while the cheaper model has just 8GB. Both devices have microSD card slots for additional storage.

DealExtreme is taking pre-orders for the Neo X8 and Neo X8s for $132 and $152, respectively, but you can find the TV boxes for as little as $119 at AliExpress.

There are cheaper options for folks looking for an Amlogic S802-powered box designed to bring Android apps to a TV. The Tronsmart Vega S89 sells for $105, the Measy B4A costs $96, and the MBOX M8 is $97.

But MINIX has a pretty good reputation for offering products in this category with decent performance. It’s also one of the few Amlogic S802 boxes to feature an external antenna so far, although it’s not clear if that means it has better WiFi reception than the competition.