There’s no shortage of companies producing small Android-powered boxes which let you run apps on your TV. But MINIX has earned a bit of a reputation for delivering models which perform better than most. And now the company’s back with a new model that seems to have best-in-class hardware.

The MINIX Neo X7 is due out in late July or early August, and it’s expected to sell for around $140 or less. 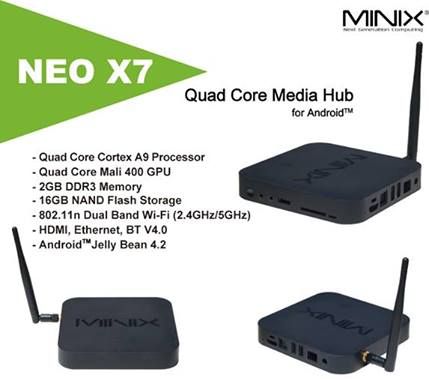 While that price is a little high by Android TV box standards, it makes the device a little cheaper than the Archos TV Connect. The Neo X7 also has better specs than your typical Android TV box, including:

Basically, the MINIX Neo X7 has the specs of a decent Android tablet, but instead of a display you get a mic jack, remote control, Ethernet jack, extra USB ports, and an external antenna.

One area where many of these Chinese boxes suffer is WiFi performance, and MINIX says it’s addressing that with a dual-band antenna designed for 2.4 GHz and 5 GHz networks.