Scoop out the guts of a premium gaming laptop and stuff them into a compact desktop chassis and you’d get something that looks a lot like the MINISFORUM EliteMini HX series line of computers.

The MINISFORUM EliteMini HX90G is an 8.1″ x 8″ x 2.7″ computer with an AMD Ryzen 9 5900HX processor and Radeon RX 6600M graphics. The latest version was announced a few months ago, it’s expected to ship in December and it’s up for pre-order now for $799 and up. But soon it will be joined by a new MINISFORUM EliteMini HX99G with an AMD Ryzen 9 6900HX processor. 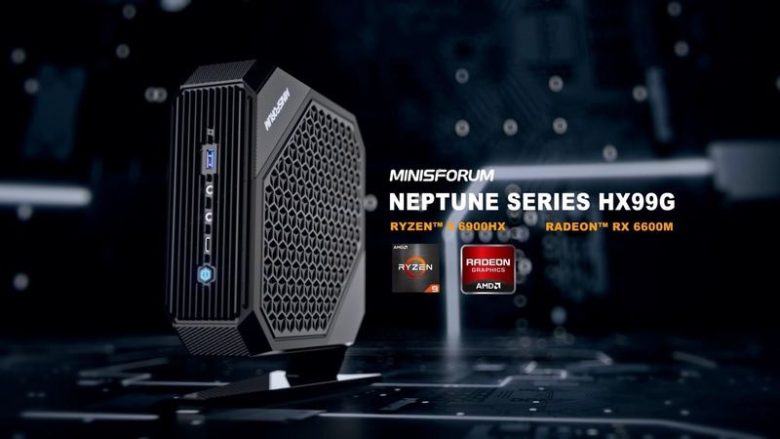 According to Japanese tech news site PC Watch, the HX99G will go on sale in Japan in December. But there’s no word on pricing or availability in other markets yet.

For the most part, the new model looks identical to the HX90G in most respects. They’re both compact computers with 45-watt, 8-core, 16-thread graphics and the same laptop-class discrete GPU.

But the move from a Ryzen 9 5900HX to a newer Ryzen 9 6900HX should bring a modest boost in CPU performance thanks to support for boost speeds up to 4.9 GHz (up from 4.6 GHz), and up to a 2X improvement in integrated graphics performance (which, I guess, might come in handy if you want to disable the discrete GPU from time to time to save power or something).

MINISFORUM says the computer support sup to four 4K displays, has a 2.5 Gbps Ethernet port, and will be available with up to 32GB of RAM and 512GB of solid state storage, although users who want to perform their own upgrades will most likely be able to configure a system with up to 64GB of RAM.

One rather contentious selling point for the MINISFORUM HX series is the cooling system the company uses for its products. In addition to dual fans, the computers use liquid metal on the CPU and GPU and have cases that incorporate carbon fiber. Some independent reviewers were underwhelmed with the application of liquid metal on early units, and describe the carbon fiber as mostly decorative. But MINISFORUM has had more than a year to make improvements, so hopefully the new models will have the cooling required to let users take full advantage of the horsepower offered by the computers’ high-performance CPU and graphics chips.