At least two new mini laptops for gamers are on the way this year. And the companies behind them have provided some new details in the last 24 hours.

Here are a few updates on the upcoming GPD Win Max and One Netbook One GX portable gaming laptops.

7/2/2020 update: The OneGX1 mini laptop is now available for pre-order from GeekBuying and Bangood, and we’ve published an in-depth OneGx1 review after testing a version with an Intel Core i5-10210Y processor and 4G LTE modem.

The GPD Win Max features an 8 inch display, an Intel Ice Lake processor with Iris Plus graphics, and game controllers above the keyboard.

GPD has provided a lot of details about the little laptop in recent weeks, but now the company has posted an official product page with more pictures and even more details. Just about all we don’t know at this point are the price, release date, and real-world performance (A crowdfunding campaign is expected to start soon though, and I’m hoping to get a pre-release review unit).

A few new things that I learned from the product page:

GPD has also shared a bunch of new pictures that give us a better idea of what the Win Max will look like:

One Netbook One GX

The One Netbook One GX is a bit more mysterious, but it’s expected to feature a 7 inch display, an Intel Tiger Lake processor with Iris Plus graphics, detachable game controllers and optional support for 4G and 5G networks.

Actually, that last bit is one of the new details announced today — previously One Netbook had let us know there would be a 5G option. But the fact that you can also choose a 4G modem is new.

In fact, the company is playing up customization options as one of the things that will help set the One GX apart from other mini-laptops… although aside from the optional suppor tfor cellular networks, the only thing One Netbook promises you’ll be able to customize is storage — the One GX will have an m.2 slot that supports up to 2TB of solid state storage. 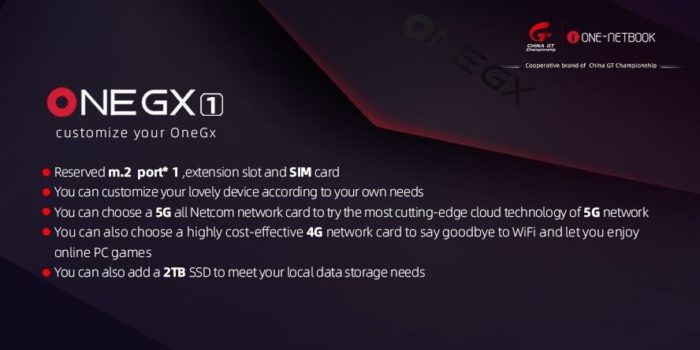 One Netbook hasn’t provided as many details about its upcoming mini gaming laptop as GPD, so we don’t know anything about the RAM, port selection, cooling, or other features yet.

While rival GPD tends to launch its products with crowdfunding campaigns, One Netbook usually makes theirs available through retail channels right away. But it’s not clear when that will happen.

The company had originally been targeting a summer 2020 launch date for the One GX, but it’s unclear if the COVID-19 pandemic has led to any delays.