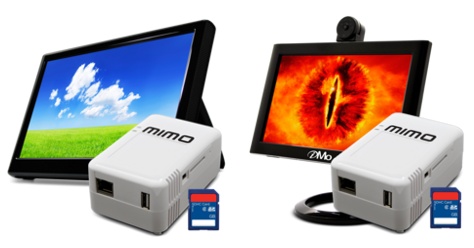 It’ll be a while before plug computers become mainstream devices, but there sure have been some amazing developments in recent times. Take the MimoPlug, for example. It’s based on Marvell’s SheevaPlug reference design, but instead of offering NAS-like capabilities as remixes like the PogoPlug and TonidoPlug do, the MimoPlug delivers a fairly complete touch-powered computing experience.

MimoMonitors is offering the Plug paired with 7-inch touchscreen monitors running at 800×480 pixels and 9 or 10-inch models at a resolution of 1024×768. The MimoPlug runs Debian 6.0 with a full GNOME desktop from either internal flash storage or an SD card. There’s also a gigabit ethernet port and one USB port for attaching the monitor. While the 10-inch version sports a built-in 3-port hub, smaller models do not — though the 9-inch comes with a webcam and stylus.

Prices for the plug and monitor pair run between $400 and $500, and they’re available right now. If you were hoping to pair your MimoPlug with an eSATA drive enclosure, you’re in luck — a mere $10 gets you a snazzy black version with one eSATA port.

Pondering a computer to hack into your fridge (or just set up in the kitchen somewhere)? The MimoPlug/monitor combo might just be an option worth considering.

One reply on “MimoPlug offers touchscreen Linux for $500 or less”