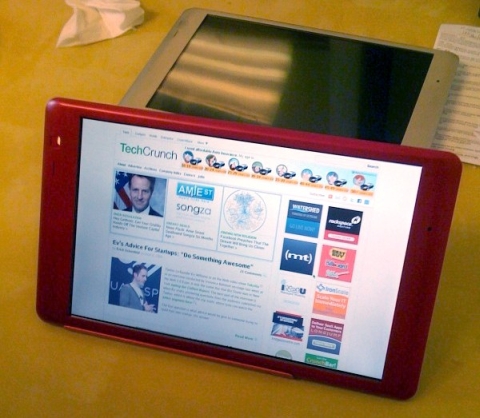 TechCrunch founder Mike Arrington may have failed in his quest to develop a $200 portable internet tablet. But it’s starting to look like he’s come pretty darn close. Last night some images of a nearly production quality prototype leaked out, and both TechCrunch and CrunchGear have confirmed that these images are the real deal. So it looks like Arrington did manage to bring together the resources to build a cheap tablet. Just not as cheap as he’d hoped. It’ll cost about $250 to manufacture the CrunchPad, which means it will likely sell for around $300 or more.

A few years ago, that would have been an amazing price. Today, you can pick up plenty of netbooks with similar specs plus touch-typable keyboards. Arrington admits that text entry using the on-screen keyboard on the CrunchPad prototype is awkward. You’re not going to want to write your doctoral dissertation or even lengthy emails or instant messages on this tablet.

Right now we know that this model has a 12 inch capacitative touchscreen and an Intel Atom processor. It’s designed primarily for running a web browser, video chat application and a handful of other programs. There’s still a lot we don’t know. How uick does it boot? What’s the screen resolution? How long doe s the battery last? How much does it weigh? Can you use it with a USB or Bluetooth keyboard?

According to CrunchGear there should be more information available in the next week or two. But given what we do know, what do you think? It’s sure pretty. But is it useful? Or would you rather have a netbook with a 160GB hard drive, full keyboard, and touchpad?

11 replies on “Mike Arrington’s CrunchPad leaps toward reality – do you care?”