As the internet has become increasingly integrated into everyday life, the web browser has become one of the most important apps that runs on most computers, allowing you to stream video, play games, do online banking and accounting, edit documents, make video calls, and much more.

But as we ask browsers to do more and more, some folks have noticed that they can slow to a crawl on systems that may not have the horsepower to handle everything.

So a startup called Mighty has come up with a solution that… honestly has me scratching my head a bit. They’ve put a Google Chrome web browser in the cloud, letting you essentially stream the browser to your computer much the way you can stream games using services like Stadia, GeForce Now, or xCloud.

Mighty is launching as an invite-only service available first for macOS, but you can fill out a questionnaire to request early access. 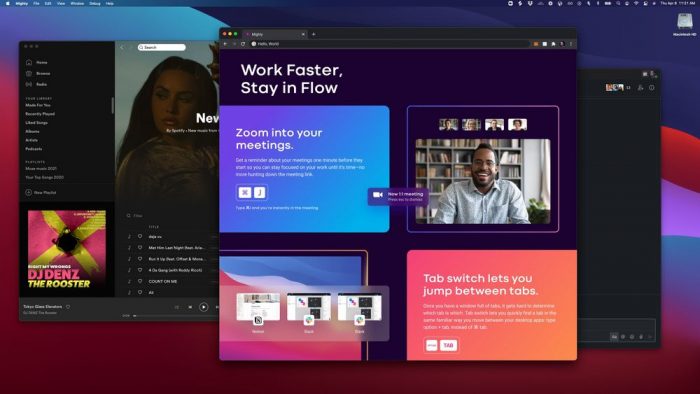 The basic idea behind the service is that if browsers like Google Chrome slow to a crawl on your computer when you strain them, then you can alleviate that by offloading most of the work to a powerful cloud server that has no trouble handling dozens of browser tabs at once, even with one of them streaming 4K video.

That way you can run a low-profile app on your desktop that just lets you connect to that browser-in-the-cloud without straining your local resources (except for your internet connection).

Mighty says the upshot is that you can keep using your old computer for longer without upgrading, while still handling heavy web workloads. Among other things, this lets your CPU run cooler, your system’s fans run quieter (assuming your computer has fans), and may even extend your laptop’s battery life. And the cloud-based browser may get faster and add new features over time as the company upgrades its server hardware and/or software.

One downside is that you’ll need a fairly fast internet connection – Mighty says you’ll “rarely notice lag” if you have a 100 Mbps connection. And that’s… not something everybody has yet.

Another downside? The privacy implications. Using Mighty to surf the web means that all of your data is going through a remote server. Mighty says that data is stored on a virtual machine that’s isolated from other users. And the company has “tight controls” over how your data can be accessed (in a nutshell, no humans will look at it unless you authorize them to do so, but Mighty notes that its service is not currently HIPAA or SOC-2 compliant).

But the biggest reason I’m not sure Mighty’s solution makes any real sense at all is the pricing structure.

Right now you probably don’t pay anything to use your web browser (aside from the cost of hardware and internet data). But Mighty will almost use a subscription-based, software-as-a-service model. The company hasn’t officially revealed pricing yet, but the number folks at Hacker News seem to be throwing around is $30 per month.

For that price, I don’t see why you wouldn’t just upgrade to a new computer every couple of years if your old one seems too slow for the tasks you’re using it for.

That said, you probably won’t be using the kind of hardware that makes Mighty’s web browser fly. Each virtualized web browser instance currently gets 16GB of dedicated system memory and the equivalent of 16 virtual CUs running at speeds up to 4 GHz.

Honestly, that’s probably more horsepower than most folks need for a web browser. But then again. I suspect most folks aren’t going to want to pay for Mighty anyway. While some folks see this browser-in-the-cloud setup as “changing the future of computing,” I have a hard time seeing it as anything more than a niche product that will appeal to a very specific subset of computer users for the foreseeable future.

That said, it’s interesting to see that Mighty is launching first on macOS – an operating system where Google’s Chrome browser has a history of causing problems that may affect performance and battery life. Maybe that niche user base Mighty is looking for is Mac users.

via Mighty and Slashdot

14 replies on “Mighty is a web browser that’s… hosted in the cloud.”