AMD is finally launching its 6th-gen APU chips, previously code-named “Carizzo.” They’re designed for mid-range laptops with price tags between $400 and $700, and AMD says they offer a good balance of performance and power efficiency.

The new processors use AMD’s new “Excavator” CPU cores and AMD Radeon graphics with support for H.265/HEVC decoding, and stronger gaming graphics than you’d expect from a chip with an integrated graphics processor rather than a discrete graphics card. 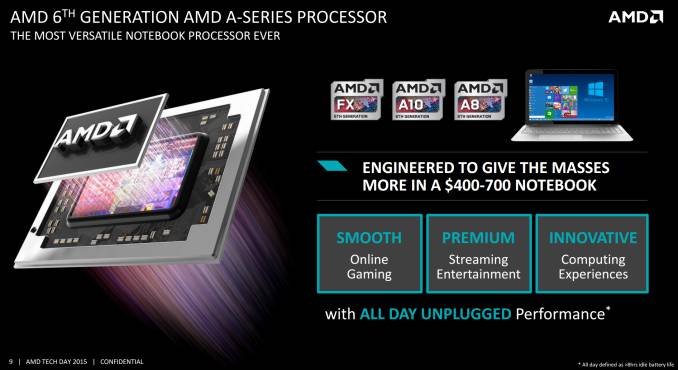 Want a really good run-down of what to expect from the new chips? AnandTech and Tom’s Hardware have some excellent, detailed reports. But here are a few highlights:

Most of AMD’s new chips are 15 watt processors, but the higher-end A10 and FX series chips will also be able to be configured as 35 watt chips for laptop makers that want to offer higher performance (at the cost of battery life).

AMD says it’s targeting the mid-range laptop segment, because more of the laptops sold in 2015 are expected to fall into that category than any other… which is to say about 38 percent. According to AMD’s numbers, the other 62 percent of notebook sales are expected to be pretty evenly divided between the sub-$400 and the over-$700 level.

But rather than try to compete with Intel in the high-end or budget spaces (two areas where Intel is doing rather well at the moment), AMD is shooting for an area where the company thinks it can stand out by offering some high-performance features at affordable prices.

While AMD is the second largest maker of x86 chips, it’s a pretty distant second to Intel in terms of volume. But AMD does have a reputation for offering strong graphics performance, and the company is leveraging the GPU cores in its chips to provide more compute power thanks to Heterogeneous System Architecture (HSA).

This means that the CPU and GPU cores can work together on some tasks to offer better performance than you’d get using just one or the other, and the chips are deigned to let both types of processor core access all available memory on your computer (up to 32GB). Effectively a chip with 4 CPU cores and 8 GPU cores can act like a 12-core chip in some situations.

Ultimately, AMD is promising that its new chips will consume about half as much power as the 5th-gen “Kaveri” chips they replace, while offering up to 1.5 times the performance.

AMD says we can expect to see laptops in this price range featuring its new chips from Acer, Asus, HP, Lenovo, and Toshiba, among others.