It looks like it’s actually pretty easy to boot Linux Mint or Ubuntu on the tablet, but not all of the hardware is supported out of the box.

Update: Russell Holly has posted instructions for installing Ubuntu on the Surface Pro. 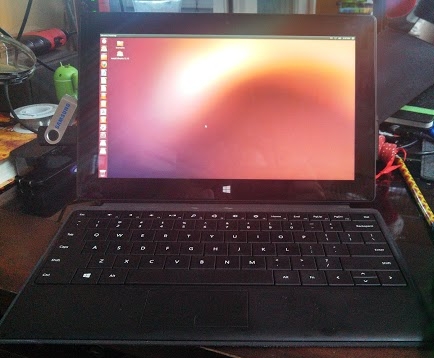 Holly is working on enabling WiFi support, but in a pinch you can always get online by using an Ethernet-to-USB adapter (since the Surface Pro doesn’t have an Ethernet port.

In other words, you might not want to drop $899 or more on a Surface Pro with the hopes of bringing it home and booting up Linux just yet — but if you’re a hacker/tinkerer interested in tweaking the tablet to make sure that touch, WiFi, and other features work, you may be able to get somewhere.

Or you could let Holly and others do the hard work and wait a few months until there’s a fully workable operating system or two available to download and install on the Surface Pro. It might take you a while to get your hands on the tablet anyway — most stores seem to have sold out shortly after the Surface Pro went on sale last week (likely due to limited supply and not necessarily immense demand).

While there are plenty of other computers that already support Ubuntu, Mint, and other Linux distributions effortlessly, the Surface Pro is unusual in that it’s one of the few tablets on the market with an ultrabook-class Intel Core i5 processor, a digital pen, and support for Microsoft’s optional Touch Cover or Type Cover.

Microsoft also offers the Surface RT tablet with an NVIDIA Tegra 3 ARM-based processor and longer battery life — but that tablet’s Windows RT software is locked down more firmly, making it tougher to install Linux or other alternate operating systems.