Microsoft today is releasing a beta version of its brand new time-lapse smoothing tool. The Hyperlapse app is available for Android, Windows Phone, and a desktop version, Hyperlapse Pro is available as a free trial preview for Windows PC. 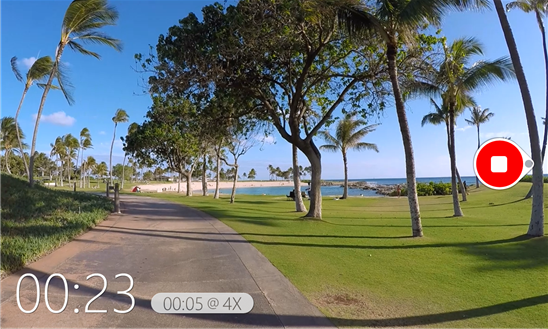 Hyperlapse is a photography process that stitches together individual frames of a time-lapse video in order to make it look like one, smooth shot instead of a choppy, jumpy mess.

Almost a year ago, Instagram launched a time-lapse smoothing tool (also called Hyperlapse) on iOS that would allow users to take video from within the app that would be automatically edited with a paired-down version of the technology. The results were pretty amazing.

However, Microsoft’s version of Hyperlapse looks to be much more robust, using image processing instead of just the internal gyroscope or accelerometer of a mobile device. One of the benefits of this process is that Microsoft Hyperlapse can be used to smooth time-lapse videos taken on any device, including a GoPro camera. You can even use old videos taken a long time ago.

According to The Verge, Microsoft’s Hyperlapse reconstructs a full 3-D camera path and stitches pixels together to create a smooth video result. It also uses image recognition to stabilize video that is taken of a person.

In addition to the mobile version of Hyperlapse, which is available in beta from the Google Play store for Android and the Windows Store for Windows Phone, Microsoft has created a more robust version for Windows desktop. Hyperlapse Pro is designed for two types of smoothing. In the standard mode, you can process it faster for less camera motion. The advanced mode is for footage from digital cameras like the GoPro. It allows you to control the speed and resolution results.

Microsoft is launching Hyperlapse Pro as a free trial version with a watermark. The company plans to release a paid version later this year. There is also a cloud based version called Hyperlapse for Microsoft Azure Media specifically for developers that wish to integrate the program into third-party websites and apps.

To join the beta for Android, join the community first. Then, visit the link listed on the community page from a supported device to download the app. Currently, Microsoft Hyperlapse Mobile for Android is only available for Samsung Galaxy S5, S6, S6 Edge, Note 4, Google Nexus 5 & 6, Nexus 9 tablet, HTC One M8 and M9, and Sony Xperia Z3.