Scientists have started working on real-life teleportation technology, but it’s still in its infancy and may never really be able to transport a human being across great distances. But Microsoft has already developed a virtual teleportation system that makes it look like you’re in the same room as someone who may be thousands of miles away.

It’s called Holoportation, and it uses Microsoft’s HoloLens wearable computer along with a series of 3D cameras. Microsoft’s demo video makes holoportation look pretty amazing… but there are probably a few reasons to take the video with a grain of salt. 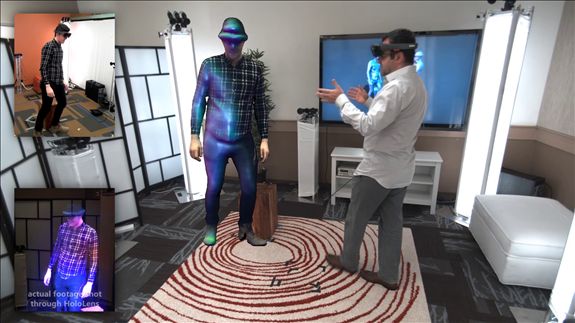 First, Holoportation would require a pretty expensive set of hardware: a HoloLens development kit alone costs $3000. And that doesn’t count the cost of the 3D capture cameras.

Second, while the HoloLens setup offers an augmented reality experience by projecting images on a semi-transparent display so that virtual imagery seems to co-exist in real world environments… there are some limitations. For example, HoloLens has a pretty limited field-of view when compared with virtual reality systems like Oculus Thrift or HTC Vive.

So while the demo video makes it look like two people are in the same room, if you’re actually looking through a HoloLens, they might disappear if you turn your head just a little bit.

Still, it’s a pretty impressive demonstration of a next-gen conferencing system that could help explain what people might actually want to use Microsoft’s augmented-reality, head-mounted computer for.