Microsoft may not be planning to launch its own Google Home/Amazon Echo-style smart speaker. But the company does have big plans for letting you interact with smart home devices using the company’s Cortana voice assistant.

The company recently started adding features to Windows 10 for computers that allow you to use your voice to turn off a PC, put it to sleep, or control music playback in new apps. In the future you may be able to us a Windows 10 PC as an always-listening smart home hub.

But Microsoft also told developers at WinHEC last week that Cortana is coming to Windows 10-powered devices including refrigerators, thermostats, and other Internet of Things (IoT) devices. 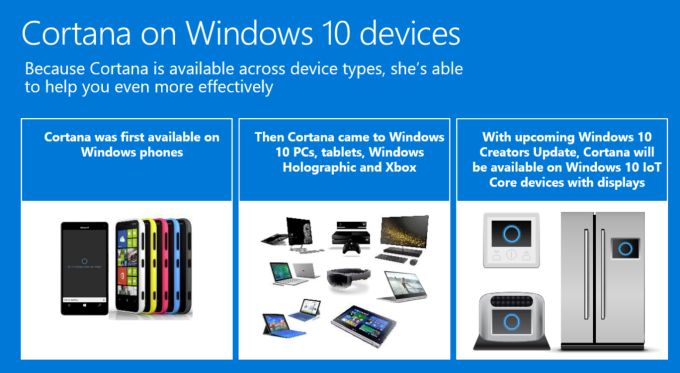 There aren’t a lot of details at the moment, but according to a slide shown at WinHEC, Microsoft is initially targeting IoT devices with displays.

Microphones may also be a requirement, at least if you plan to use the voice features (technically you can also type to Cortana). One of the features Microsot is working on is support for far-field voice recognition, allowing Windows 10 devices to recognize your voice from across the room, much the way Google Home and Amazon Echo already do. Another is “Wake on Voice” standby support, which brings support for always-listening functionality.