The Microsoft Surface Pro X is a thin, light, and fanless tablet with built-in support for 4G LTE. It’s also the device to ship with a Microsoft SQ1 processor, which is basically a custom version of Qualcomm’s Snapdragon 8cx.

Microsoft unveiled the Surface Pro X just over a month ago, and now it’s available for purchase for $999 and up.

Is it worth the asking price? That probably depends on what you’re looking for…but early reviews seem to suggest that the answer for most folks is probably not. 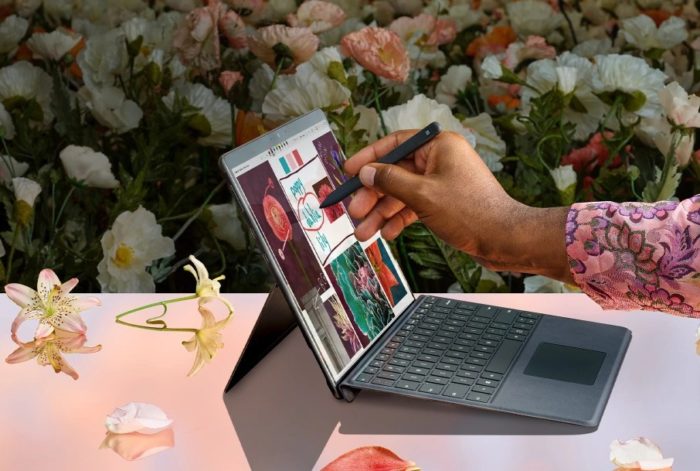 You can pay extra for up to 16GB of RAM, up to to 512GB of storage, and optional accessories including a keyboard cover and/or Surface Slim Pen.

That means a top-of-the-line model can easily set you back $2,000 or more.

Weighing in at 1.7 pounds and measuring about 0.28 inches thick, the tablet is… really about the same size as the Intel-powered Surface Pro 7 (which is 0.33 inches thick and 1.7 pounds), but it has a slightly larger display, slimmer bezels, and a fanless design.

What it doesn’t have is native compatibility with just about every Windows app.

One of the differences between Windows 10 on ARM and earlier ARM-based versions of Windows is that you can run most older Windows applications thanks to support for x86 emulation. But there’s some overhead required, which means that x86 apps run more slowly than those that are compiled for ARM — and Microsoft has had limited success convincing app developers to compile ARM versions of their programs.

So one of the reasons Microsoft released the Surface Pro X is clearly to tackle that issue head-on. It’s a premium tablet with one of the most powerful ARM processors to date. It shows what a Windows on ARM device can be. And if it becomes a popular item, then it could spur more development for the platform.

But right now if you buy one, you’re committing to a device that’s a little thinner than a Surface Pro 7, but which offers slower all-around performance and even slower performance still when it comes to running x86 apps.

That’s not a huge issue since most older apps still offer 32-bit versions. But over time they’re likely to phase those out, which means that unless those same developers port their apps to ARM, the latest versions may not run on the Surface Pro X at all.

All of which is to say that buying the Surface Pro X is kind of gambling on a future that’s not quite here yet… and which may never arrive. That said, it’s not exactly a useless device.

Want always-connected 4G LTE capabilities, a tablet with a large screen and slim bezels, support for key apps including Microsoft Office, Edge, and OneDrive, and willing to pay a premium price for it? Then maybe you’re in the (likely small) target market for this tablet.

But if you want a faster computer that can run every Windows app and which offers comparable battery life and longer performance, then the Surface Pro 7 seems like a better bet.

It’s a little sad that this seems to be the story of every Windows on ARM device released to date. But while the Microsoft SQ1 processor seems to offer better performance than any Snapdragon chip to date, there just doesn’t seem to be a good reason to spend $1000+ to buy a tablet that doesn’t offer many tangible benefits over one with an x86 processor in terms of battery life, performance, cost, or portability while suffering from an app gap.