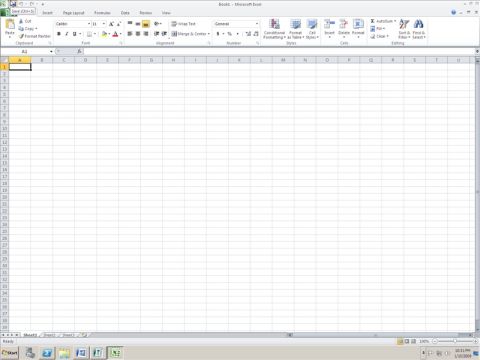 Microsoft is reportedly thinking of ways to develop a version of its Office suite for netbooks. According to Network World, Microsoft business division chief Stephen Elop implied that the goal is to come up with a low cost version of Office that provides limited functionality. After all, who wants to pay hundreds of dollars for a version of Microsoft Office that will run on a $300 laptop?

But I’m hoping Microsoft has at least one other thing in mind. If the leaked screenshots of Office 14 (the upcoming version of Microsoft Office) are anything to go by, it looks like Microsoft plans to continue using its new ribbon-style toolbars, first introduced in Office 2007. And that’s fine if you’re using a desktop computer with a 1280 x 1024 pixel display. But most netbooks have 1024 x 600 or 1024 x 576 pixel displays. And that ribbon interface at the top of the screen takes up a lot of room.

I’d hate to see a version of MS Office dstributed for netbooks that doesn’t come with a lower profile toolbar designed to maximize your on-screen workspace. Editing spreadsheets is a whole lot less fun when you can only see two or three rows at a time.

Update: OK, I’ll admit it. I may just be a crotchety old computer user who fears change here. I’m not a big fan of the visual look of the new Microsoft Office ribbon. But I also haven’t used a version of MS Office newer than Office 2003 (while I have spent some money on Windows licenses in the last few years, OpenOffice.org, Zoho, and Google Docs have served my word processing and spreadsheet needs, so I haven’t felt the urge to spend any money on Office). As some commentors have pointed out, the ribbon might not be as chunky as I initially thought and it’s not hard to hide. I’ll let y’all duke it out in the comments.

The main thrust of the story, though, is that Microsoft is staking netbooks into consideration as it makes business decisions. And that’s generally a good thing. If the company had realized that people might want low power, cheaper computers a few years ago, Windows Vista might have run as well on netbooks as Windows XP and Windows 7 do.

29 replies on “Microsoft working on netbook specific version of Office?”