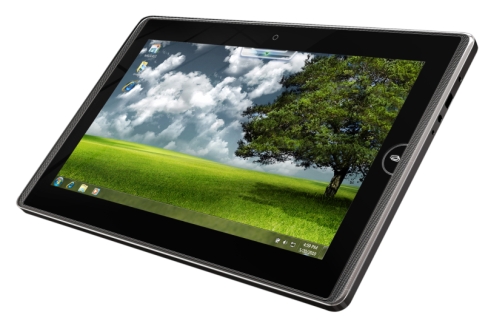 Tablet computers running Windows have been around for about a decade. But 2010 hasn’t been a good year for Windows tablets. Sure, Windows 7 Home Premium, Professional, and Ultimate editions all have built-in support for touchscreen displays and multitouch gestures. But the Windows tablets of yesteryear were expensive (often running $1500 or more), bulky (often having full laptop-style keyboards which fold under the display when you’re not using them), and include the dreaded stylus (which is great for precise input and handwriting recognition, but which is awfully easy to misplace).

This year the Apple iPad is busy conquering the world and Google Android and Chrome OS-based tablets are poised to hit the market any day/week/month now. 2010 is also the year when HP was supposed to launch a killer tablet running Windows 7 — before scrapping the project indefinitely and trying to retool the slate to use the same WebOS smartphone operating system found on the Palm Pre and Pixie.

So what’s Microsoft CEO Steve Ballmer’s take on all this? Either denial or optimism, depending on how you look at it. At a keynote at Microsoft’s Worldwide Partner Conference, Ballmer said that Windows 7 tablets hsould start hitting the streets before the end of the year.

According to Ballmer, Asus, Dell, Samsung, Toshiba, and Sony will all ship Windows 7 slates. Noticeably absent from that list is HP… but it’s a pretty good list nonetheless. If at least a few of them actually manage to bring products to market, we could see a pretty big shakeup in the tablet space. MSI is also working on a Windows 7 tablet, as are a number of smaller companies.

The thing about tablets is that there may very well be room for a wide range of different types of devices. Just as there are inexpensive netbooks and high end gaming rigs on the laptop space, we could start to see Android, iOS, and WebOS tablets selling for $500 or less and Windows 7 tablets with more powerful processors and advanced features such as hardware keyboards, active digitizer for handwriting recognition and artistic endeavors selling for much higher prices.

The big question I still have is whether budget Windows tablets will be able to compete in any reasonable way with budget smartphone-style tablets. I haven’t seen a sub-$500 Windows tablet that seems as easy to use as an iPad, and often PC makers end up making compromises to keep the prices down, such as shipping cheap Windows tablets with Windows 7 Starter Edition — which doesn’t have built-in support for touchscreens and multitouch gestures.