Microsoft’s upcoming Windows 10 is an operating system designed to run on a range of devices including smartphones, tablets, notebooks, desktops, game consoles, and even the company’s upcoming HoloLens virtual reality system.

While Windows will look a little different on phones than notebooks or Xbox consoles (and it’ll include different components), each version will share a common core including libraries and runtimes — and Microsoft says “Windows apps” will be able to run on any device running any version of Windows.

Does that mean you’ll be able to play StarCraft or run Office 2013 on your phone? Not exactly. Those would be “Windows desktop apps.” 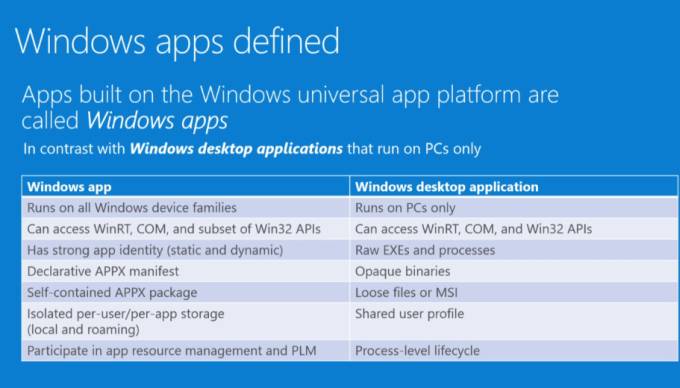 Microsoft is using the term “Windows apps” to describe all software that’s designed to run across the full range of Windows 10 devices including phone, tablet, PC, Xbox, Internet-of-Things, and HoloLens devices. These are the apps that used to just be called “Universal Windows Apps,” and which use the common APIs available across the extended family of Windows 10 products.

So if you’ve been calling Photoshop, Quickbooks, LibreOffice, VLC, Handbrake, Foobar2000, and thousands of other applications Windows apps, you might need to get used to a new name: Windows desktop apps.

That’s the phrase Microsoft is using to describe software designed to run on traditional PCs that you use with a keyboard and mouse (including notebooks and desktops).

On the one hand, it’ll be nice to have a new naming scheme in place so we can stop referring to “Windows Store apps” with a Modern, or Metro-style user interface.

On the other hand, the new convention could get confusing. If you’ve been referring to the software you’ve run on Windows computers for the past 20 years as “Windows apps,” it might take a while before you start to think of them as “Windows desktop apps.”

via The Verge and Channel 9