Microsoft is now taking pre-orders for the Surface RT tablet. Prices start at $499 for a model with 32GB of storage. You can pay extra for a keyboard cover or extra storage space.

The tablets will officially hit the streets on October 26th. 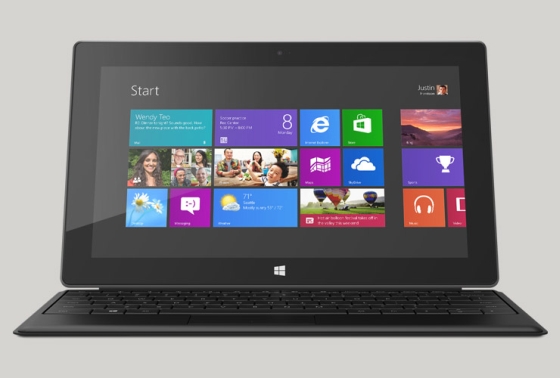 Tablets include front and rear cameras which can shoot 720p HD video, 2 mics, a mini HDMI port, microSDXC card slot, and a USB 2.0 port. You also get 802.11a/b/g/n WiFi, Bluetooth 4.0, and a range of sensors including an accelerometer, gyroscope, compass, and ambient light sensor.

One of the key things setting Microsoft’s Surface tablets apart from the competition is the cover which not only protects the screen, but which also functions as a keyboard. But that cover will cost you — it’s not included in the $499 starting price.

There will actually be two different types of covers. The Touch Cover has a touch-sensitive keyboard, while the Type Cover has physical keys that you actually press down on.

The tablet also has a kickstand in the back so you can prop it up on a table or desk while using the keyboard.

Here’s a break-down of the Surface RT prices:

The tablet runs Windows RT, which looks virtually identical to Microsoft’s Windows 8 operating system. The difference is that Windows RT is designed to run on devices with low power ARM-based processors (and it also comes with a pre-release version of Office 2013).

As a Windows RT tablet, the Surface RT will be able to run apps from the Windows Store — but it won’t be able to run older apps designed for computers with x86 chips. So if you have favorite Windows 7 or Windows XP apps that you want to run, you’d better hope the developers have updated them to work with Windows RT.

The $499 starting price puts the Surface in direct competition with Apple’s iPad, which also starts at $499.

For the same price, Microsoft’s tablet has 32GB of storage (rather than 16G), 2GB of RAM (rather than 1GB), USB and HDMI ports, and a memory card slot.

But Apple’s tablet has a higher resolution display and a heck of a lot more momentum. While you arguably get more tablet for the money with the Surface RT, I think a lot of people were hoping Microsoft would take a cure from the Amazon Kindle Fire or Google Nexus 7 and offer a tablet that costs significantly less than an entry-level iPad.

Microsoft also plans to launch a Surface Pro tablet soon, featuring an Intel Core i5 processor and full Windows 8 operating system. The company hasn’t yet said how much that model will cost.