Microsoft’s Surface Neo is a dual-screen device that the company is positioning as a brand new product category… and honestly, it’s kind of hard to argue with that characterization.

The Neo features two small screens held together by a 360-degree hinge allowing you to hold the computer like a small or large tablet. But there’s also a portable keyboard that you can place over a portion of one screen, giving you physical keys for typing while you use the uncovered portion of the display as a touchpad or secondary screen.

It’s powered by an Intel Lakefield processor with Gen11 graphics, and while Microsoft is giving us our first look at the Neo today, it’s not ready to ship yet — the company says it’ll ship in time for the 2020 holiday season. 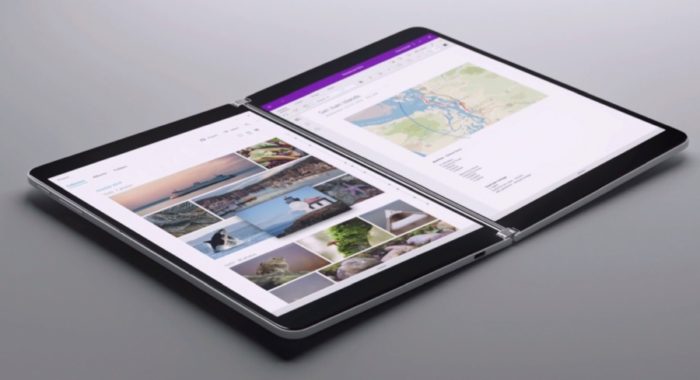 Like most Surface products, the Neo works with a Surface Pen. In this case, it can attach to the back of the device when it’s not in use, and it has a rechargeable battery and support for wireless charging.

The keyboard also connects to the back of the tablet magnetically, but it’s designed so that you can flip it around to the front and start typing without the need to manually detach, reattach, and position the keyboard. 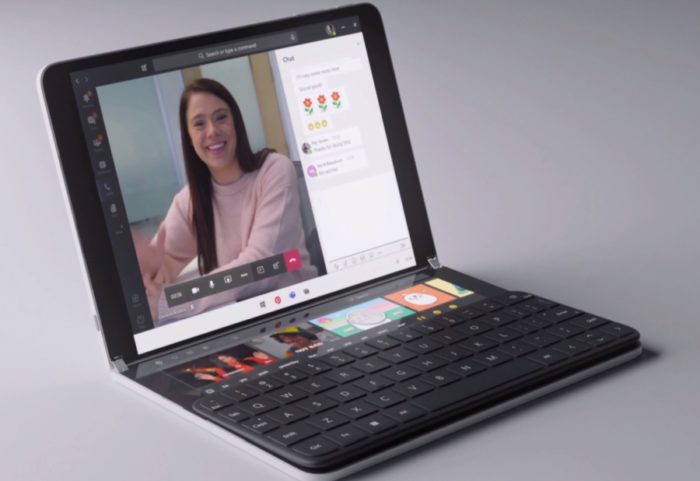 Microsoft says the Surface Neo weighs about 1.44 pounds and each side measures 5.6mm (0.22 inches) thick.

The device has what Microsoft’s Panos Panay says is the thinnest laptop LCD display, and the screens are covered with Gorilla Glass.

Among other things, the operating system supports running apps in one window or across both screens and includes new features like “spanning,” which allows you to drag an app from one screen to the middle of the device and then letting it go so that it expands to fill both screens, with the UI adjusting accordingly. 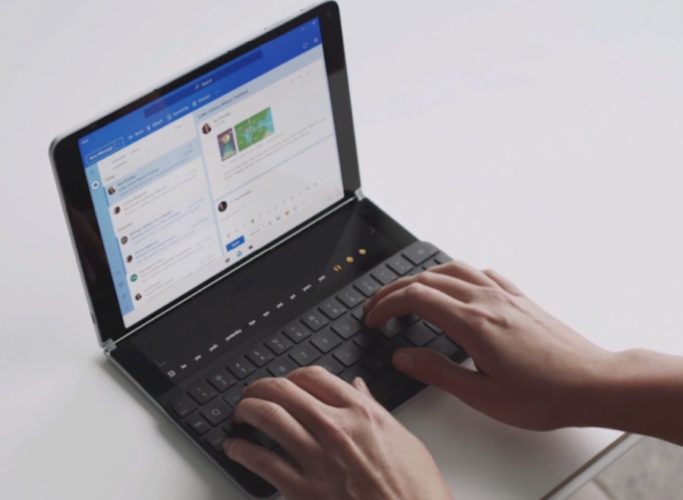 During an on-stage demo today, Microsoft representatives showed how clicking a link in an Outlook email running in one screen can open a web page in the second screen. Shift the Neo so that you’re holding it in portrait mode rather than landscape, and both windows will rotate accordingly.

And if you place a keyboard on the bottom screen, both windows will automatically move to the top screen, while the UI changes so that the bottom screen gives you access to emoji, a search bar, or other functions.

You can also move a video or other app from the primary screen to a small portion of the keyboard-covered display if you want to keep watching (or running an app) while you type a document, for example.