Microsoft is holding an event in New York City starting at 9:30 this morning where the company is expected to unveil new hardware and software products aimed at the education market.

But last night Twitter user Walking Cat spilled a few beans by posting pictures and some details of an unannounced device called the Surface Laptop… which is likely to be formally announced later today. 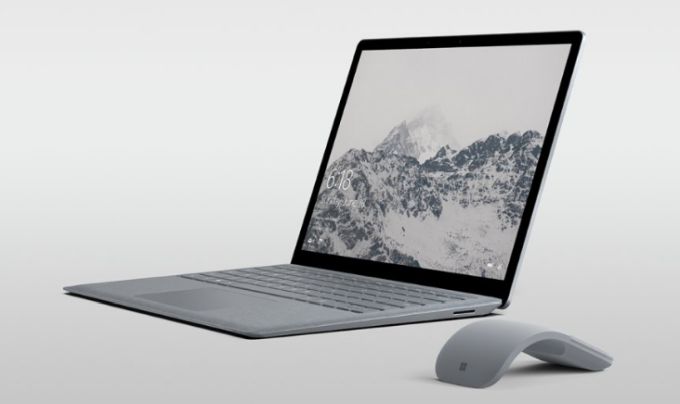 The Surface Laptop is expected to feature a 13.5 inch PixelSense display and measures 9.9mm (0.39 inches) thick at its thinnest point (and 14.47mm, or 0.57 inches at its thickest). It should weigh less than 2.8 pounds, and unlike the Surface Book or Surface Pro, this laptop does not appear to be a 2-in-1 tablet with a detachable display or keyboard. It’s just a notebook.

But it is an unusual notebook, since it’s also expected to be one oft he first devices to run Windows 10 S, which may be the new name for the operating system that had previously been referred to as Windows 10 Cloud.

It’s a stripped down version of Windows which basically acts like the full version of Microsoft’s operating system… except that it can only run apps downloaded from the Windows Store. Unlike the now-defunct Windows RT, that doesn’t mean Win32 apps won’t run. It just means they have to be distributed through the Windows Store.

Pretty much everything we know about Windows 10 Cloud/Windows 10 S so far comes from a series of leaks though, so it’s possible that new details will shed more light on the operating system during today’s launch event. But while some folks might wonder why you’d want a less functional version of Windows, the fact that Microsoft is focusing on education provides a big clue: Windows 10 S is designed to take on Chrome OS in the classroom (and maybe in some business settings).

By locking down the operating system so that it only runs apps from the Windows Store, Microsoft can ensure decent performance even on a device with relatively inexpensive specs (if an app can’t run well, you should be able to find out before you even try to download it), and students, employees, or other folks shouldn’t be able to gunk up their laptops with unapproved (and potentially dangerous) software as easily.

Chromebooks also have a reputation for being relatively secure and easy to use thanks to the way apps run in a sandboxed environment, and updates are downloaded and installed automatically in the background. It remains to be seen whether Windows 10 S will be able to compete on those fronts… or on price. While not every Chromebook is a cheap laptop, many models that are popular with schools (and home users) can be bought for under $300.