The Microsoft Surface Hub is a big-screen computer that you can hang on a wall or an easel and use in a conference room or other work setting where collaboration is more important than compact size.

Microsoft’s been selling the first-gen Surface Hub since 2016, and now the company is almost ready to begin shipping an updated model.

The Surface Hub 2S, which was unveiled last year, will be available starting in June. 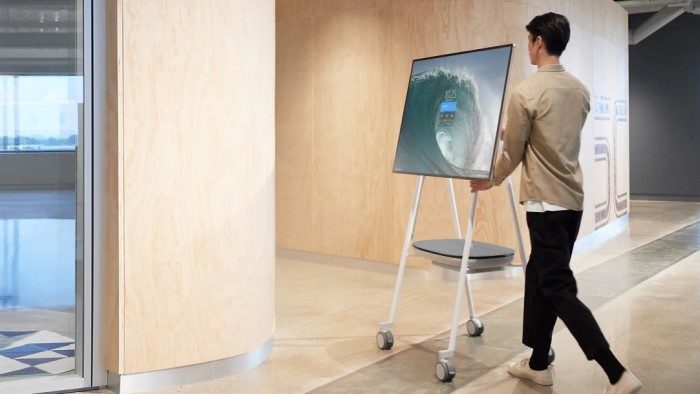 This is clearly not a computer designed for home use — and it doesn’t even run Win32 desktop apps out of the box, instead it has a custom version of Windows 10 designed to run Universal Windows Platform apps (including Office 365), and which is optimized for pen and touch input. It’s basically a big digital whiteboard.

But it’s also interesting for a few reasons. First of all, it’s first-party hardware from Microsoft branded under the Surface name. So while it’s not exactly aimed at the same crowd who might buy a Surface Go tablet, a Surface Laptop, or even a Surface Studio all-in-one PC, it does give us an idea of how Microsoft envisions its hardware and software working together.

That upgrade will bring support for features such as the ability to tile multiple Surface Hub devices together to create a large screen experience. The Surface Hub 2X also enables screen rotation, allowing you to switch from landscape to portrait mode seamlessly.

According to The Verge, the Surface Hub 2S features a 50 inch, 3840 x 2560 pixel IPS display with a 3:2 aspect ratio, an 8th-gen Intel Core i5 processor, 8GB of RAM, 128GB of solid state storage. Those specs might not sound all that impressive for a $9000 computer, but the big screen display, the custom hardware, and the business-focused functionality are the device’s key selling points.

Microsoft will also offer an 85 inch model with a 16:9 display, but the company hasn’t shared many details about that version yet.