The Microsoft Surface Duo is a dual-screen Android smartphone that folds up like a book, supports a Surface Pen, and will come pre-loaded with Microsoft apps. It’ll be the first Microsoft-branded smartphone since the company killed off its Windows 10 Mobile operating system, and while the Surface Duo was originally expected to ship in time for the 2020 holidays, recent reports suggest it could be ready to go as soon as this summer.

Microsoft hasn’t confirmed the phone’s actual specs yet. But the folks at Windows Central report that they’ve obtained a list of the hardware specifications for the Surface Duo. 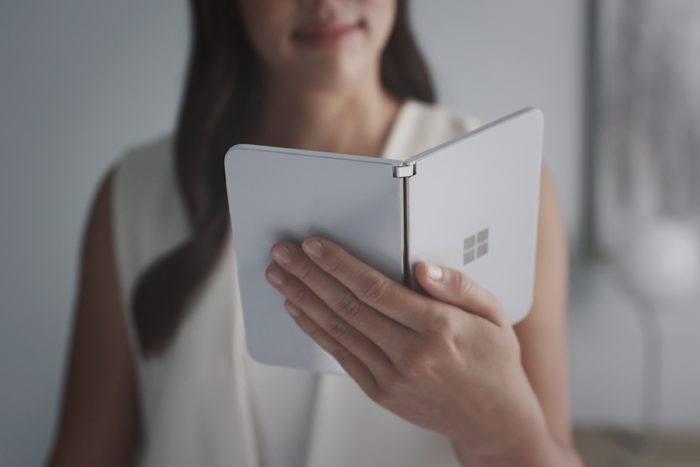 Apparently the phone is at the point where Microsoft is testing it by allowing employees to request a Surface Duo to take home and use, and Windows Central implies that its sources may be some of those employees with access to pre-production phones.

That said, the hardware is said to be pretty much finalized, which means there probably won’t be many surprises when the Surface Duo eventually goes on sale.

So what can we expect?

The phone will also reportedly have a fingerprint sensor and nanoSIM card slot, but no headphone jack or microSD card reader.

Overall the specs look… interesting. On the one hand, last year’s flagship processor, 6GB of RAM, and 256GB of storage should be enough to offer decent performance. But you’d think a phone with two displays would have a larger battery.

Shipping a flagship phone in 2020 with just a single camera also seems like a strange move — although if it’s a good camera, that might not be much of an issue. The new iPhone SE and Google’s Pixel 3a show that you can take some pretty great pictures with just a single-lens smartphone camera.

There’s still no word on how much the phone will actually cost though, so it’s not clear whether it makes more sense to compare the Surface Duo to modern flagships (priced at around $800 and up) or mid-range models more like the iPhone SE and Pixel 3a.

Microsoft’s decision to opt for a Snapdragon 855 hints that maybe this thing won’t be super expensive. But it’s likely that decision wasn’t made to save money so much as it was to avoid having to include a 5G modem in this phone. Qualcomm requires device makers who use the newer Snapdragon 865 chip to also use a separate Qualcomm 5G modem.